Train parks and railroad museums in Orange County are all around. These are all the play places for train lovers that I can think in and near Orange County, CA.

Whether you like to see big locomotives up close, far away, play on them, ride on them — I’ve got the parks for your family.

Please comment if I am missing any! I think the list is pretty comprehensive thanks to your help!

If you are looking to actually take a train trip in Orange County, I have a post about Train Trips for Orange County Locals that you might want to check out for ideas.

*Don’t think I need to say it – but I’ll say it anyways: If it’s you against the train, the train’s gonna win. Be safe and stay off the tracks! 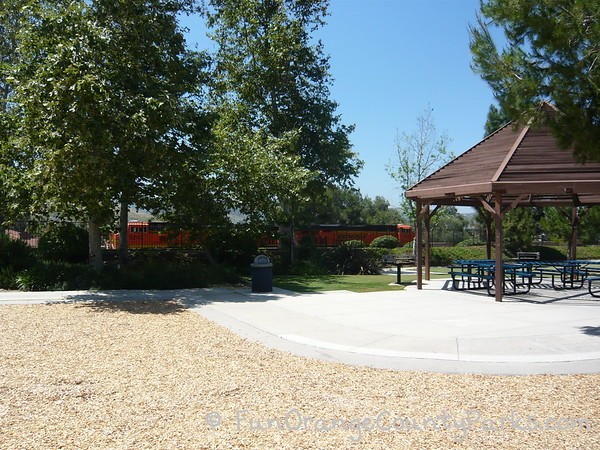 See BNSF whoosh by just beyond the fence. 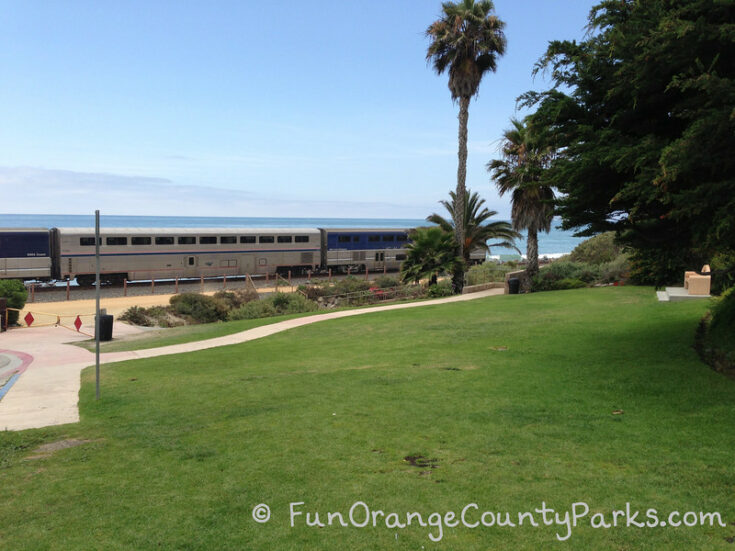 These tracks run all up and down the beaches in San Clemente. Cover your ears; they are loud!

There is a bridge at T-Street where you can see the trains from above.

This is one spot where it might be tempting to cross the tracks, but everywhere along here there are tunnels that go UNDER or bridges that go OVER so you should never need to get anywhere near the tracks except when you go through the crossings to get to the beach at North Beach or Califia Beach.

[There is a service interruption to try to shore up the tracks near the OC / San Diego county border just south of the trail, but for now Metrolink is running on the weekends.] 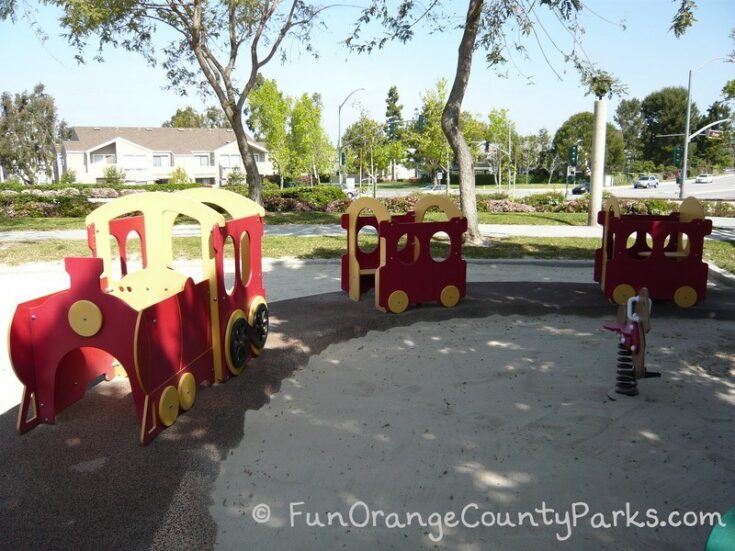 This little train playground is just the right size for toddlers. 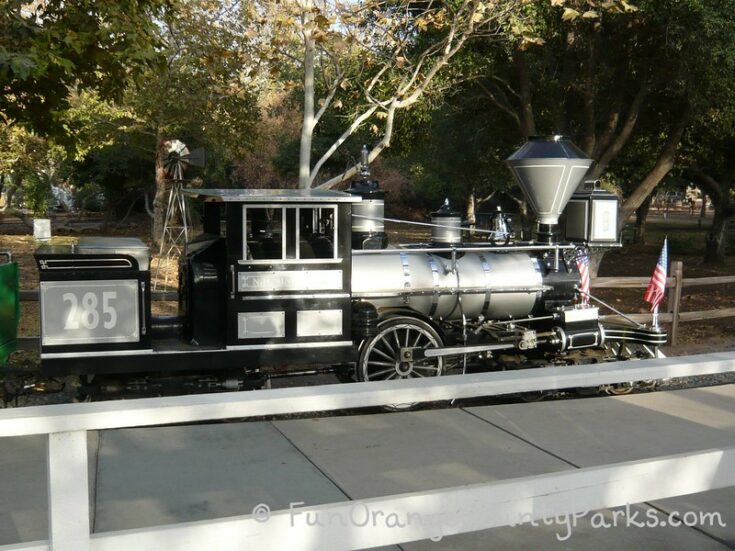 For a fee, you can ride the train at Irvine Park Railroad. 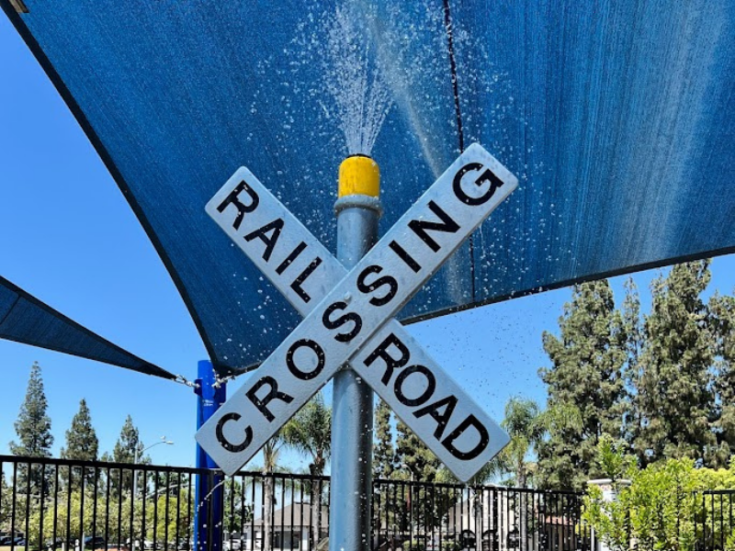 This one is a splash pad with a train theme!

And the La Habra Children's Museum has trains outdoors. There is a red train car outdoors next to a children's theater. Reader, Elise, told me the museum has a large model train set up inside, as well. She said you can go in the train cars outside. 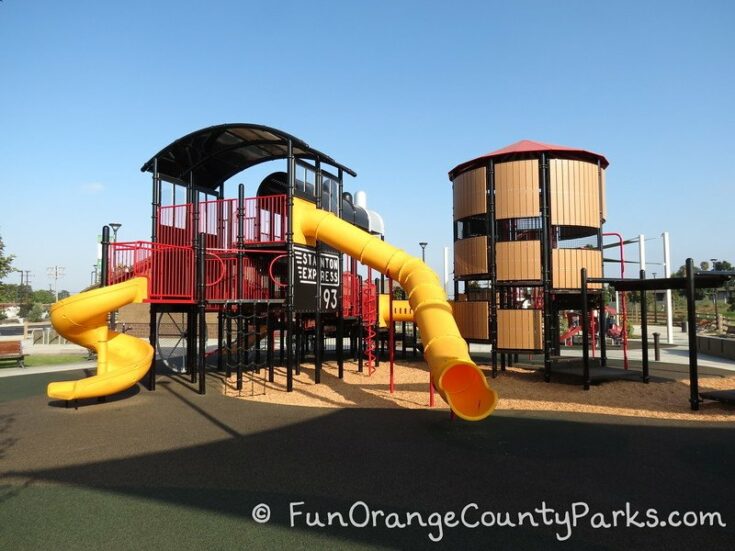 The splash pad has a little train AND the huge playground and slide looks like a steam locomotive and water tower. 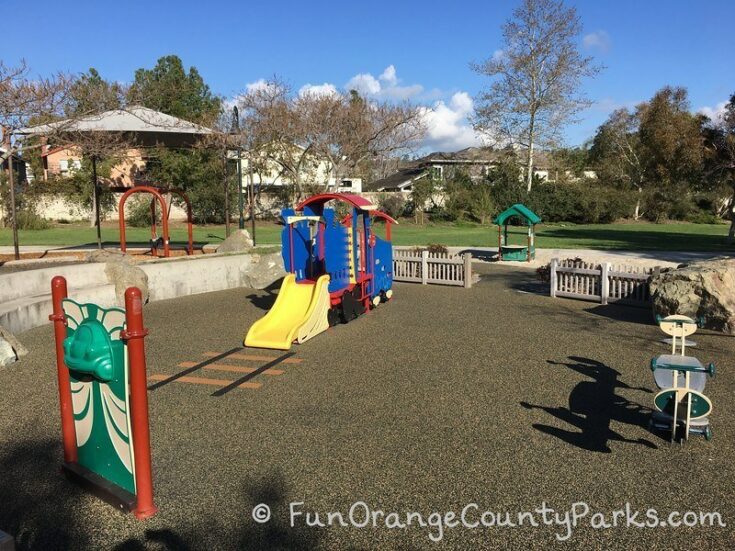 There is a little choo-choo with a slide in the toddler area of this park that's also good for big kids! You can see the train pass by on the tracks near the creek here, too. 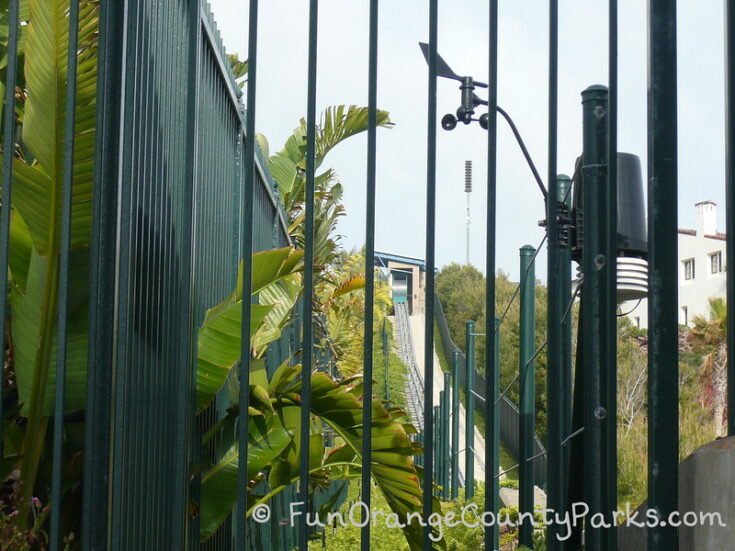 This one tends to run only during summer months and, even then, not very reliably. I need to get a better photo, but this is a view of the tracks that the funicular takes halfway down the hill to the beach. Parking is free and so is the funicular ride. 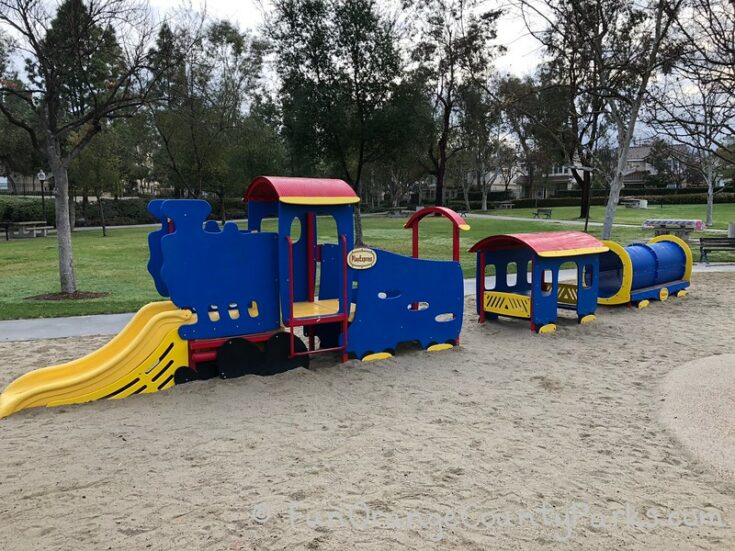 Another nice little playground train with tunnels and slides. 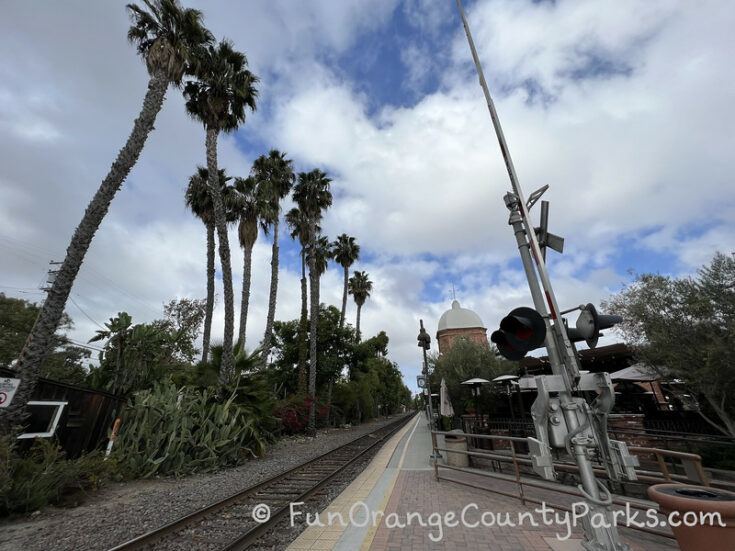 Los Rios playground is very near the San Juan Capistrano train station. Not only do trains go by on the weekend, the train station also has old train cars as a facade on the outside if you walk around on the other side of Trevor on the Tracks restaurant. So your kids can see an old red caboose by just walking by!

It is rather pricey ($15 per adult and $12 per child) to get into Zoomar's at River Street Ranch and you need to pay an extra $4 to ride their "kiddy train" -- but that's a walkable destination from this playground. 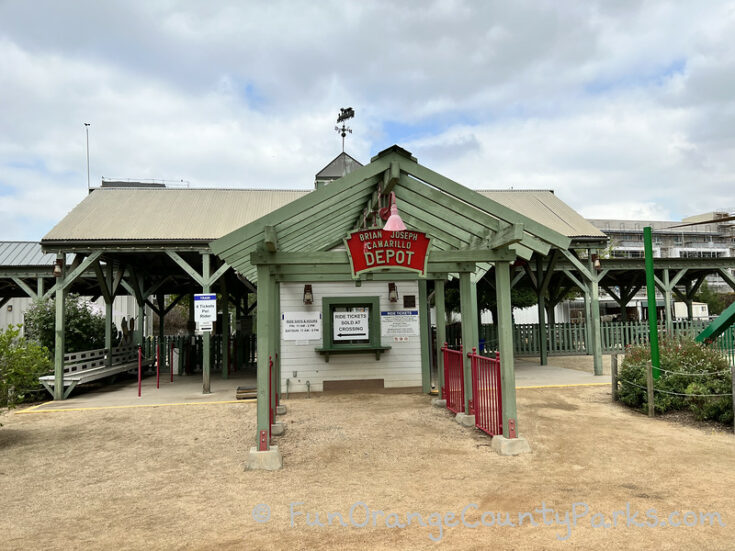 The Santa Ana Zoo has a little train ride along with a carousel and ferris wheel! You do need to pay to get into the zoo and pay for your ride on the train, too. The best deal is getting the membership! Also make sure to read my blog post and check the official zoo website because days/hours are limited. 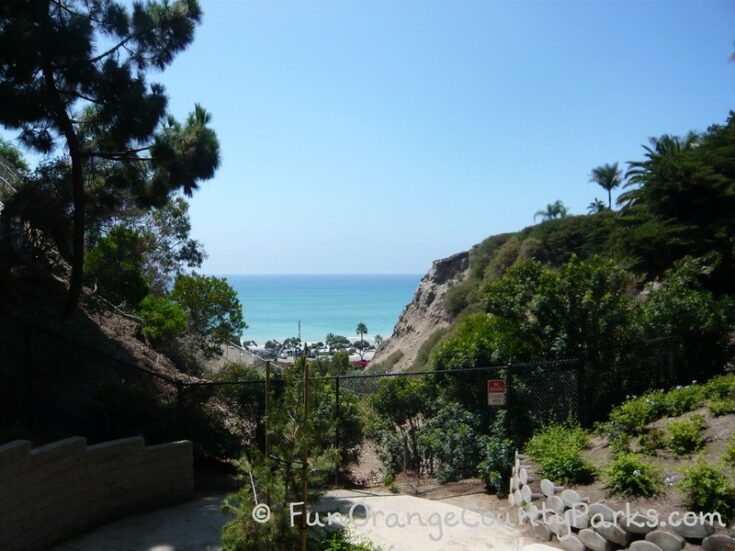 Pines Park has a picnic table with a little peek-a-boo view of the train tracks near Capistrano Beach Park below.

We used to love watching trains from Capistrano Beach Park, but the parking lot is often closed there now due to beach erosion. This is double the fun because you can have an ocean view AND a train view! 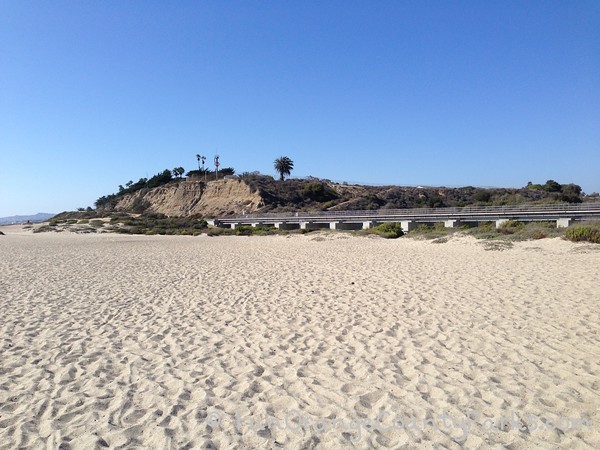 Trestles is a beach at one of the last freeway offramps in Orange County off I-5. You can take a long walk down to the ocean and see the train trestle bridge (whether the train is running or not -- which it isn't at the moment due to repairs of the tracks. 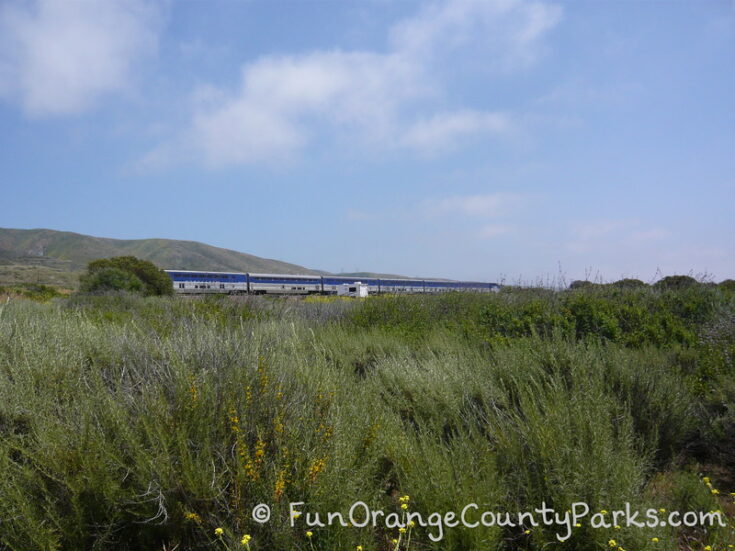 This is another spot where you can see the trains as long as they are running between Orange County and San Diego. (That seems to change day-by-day, so I wanted to keep it in here for when the time comes for the trains to cross counties again.) 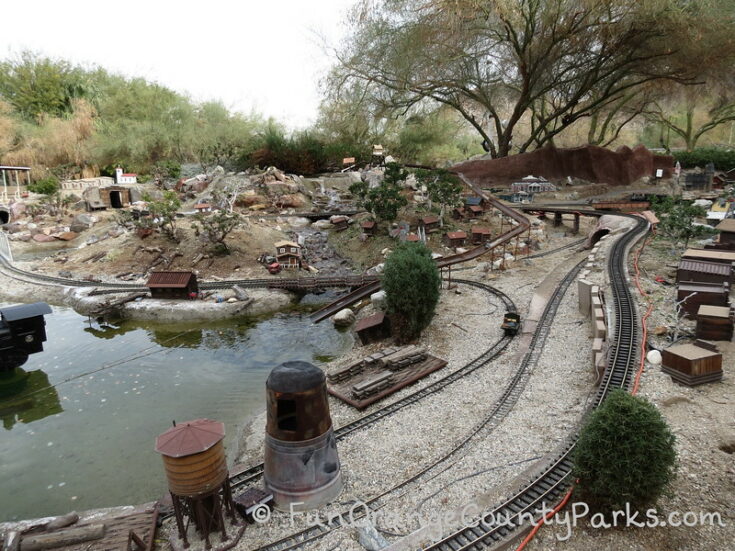 The Living Desert Zoo and Gardens in Palm Desert

This one isn't in Orange County, but I'd definitely recommend the trek! This is an impressive model railroad you can experience outdoors at the zoo!

Castle Peak & Thunder Railroad (backyard model railroad based on Disneyland) with periodic open houses. I first saw this on my friend Jill’s blog (Sandy Toes & Popsicles). Her post has tons of photos and tips.

Christmas Trains in or near Orange County

These are other spots outside of Orange County which readers recommended.

When my kids were small they loved to go to the heritage park in Santa Fe Springs... it is a really nice place for children who love trains ... http://www.santafesprings.org/library/heritage/default.asp

Thanks for the tip, Mia.

Have you been to Goathill Junction in Irvine or the Riverside Steamers in Riverside at Hobby Hunter Park. You have to check the dates - because they are basically only certain Sundays of the month but they are minitature trains that you can ride for FREE! They do ask for donations. Great fun for little boys that love trains.

My boys love trains. Even though we live a couple blocks from the train tracks, they still get excited everytime we see one. We'll have to remember this post next time we are in So. Cal.