The playgrounds were wet, but the kids wanted to take a walk in the rain.  So we packed up the cocoa in a thermos and headed outdoors with our umbrellas. They told me all the rules about playing in the rain at school: no playing in the sand, no playing on the grass, and no playing on the playground structure since it’s anchored in the sand. The Kindergarten kids are allowed to play on their playground equipment since the surface is bark. They just aren’t allowed to slide down the slides.

That leaves playing tetherball, handball, or just playing on the blacktop “which isn’t much fun” according to my 3rd grader. So here we were at the playground on a rainy day. I didn’t say one word about rules. I didn’t say what they could or couldn’t do. As we sipped our cocoa, they started making up safety rules for themselves. And games!

How can you not want to play on the brightly colored rainbow under the swings? My son created a crazy Follow the Leader style game which he very deliberately named Color Jumping. We followed him — and his directions — to jump, hop, spin, run backwards, twirl, leap, and zig-zag across the colorful surface.

Get the idea?  Your kids can go crazy with this.

In between all the action we noticed the different details of a wet playground. The lack of leaves on the trees. The flooded tree wells and lawn area. Earthworms saturated in the sidewalk cracks. The birds catching the stranded worms. And this abandoned sandbox shovel filled with rain water. 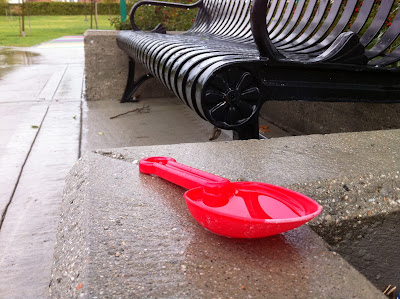 The kids never would have pursued this on a sunny day, so it was fun for me to watch their creativity come into play. Visit NatureRocks.org to find other ways to get outside and into nature.

Looks like fun? Where's this playground with the rainbow ground?

Cute idea!!! Where is that rainbow playground? Would love to check it out!