Have you ever felt the thrill of whale watching from a boat? You have the advantage of a captain who knows the local waters and regular locations of the whales. But I can get the same thrill when I spot a whale from shore. In southern California, gray whale season typically runs from December through March. We visited Point Reyes National Seashore in northern California in April and were able to see these whales very close to shore — thanks to an incredibly clear day free from fog or clouds. If you are traveling to the coast of Oregon or Washington this summer, you may still be able to spot them there. I’ve seen them in Oregon in September. I took some gray whale photos for kids for you to share so your children can know what to look for when they are standing on shore.

First, as a way to orient yourself, this was the full view of what we saw that day at Point Reyes: 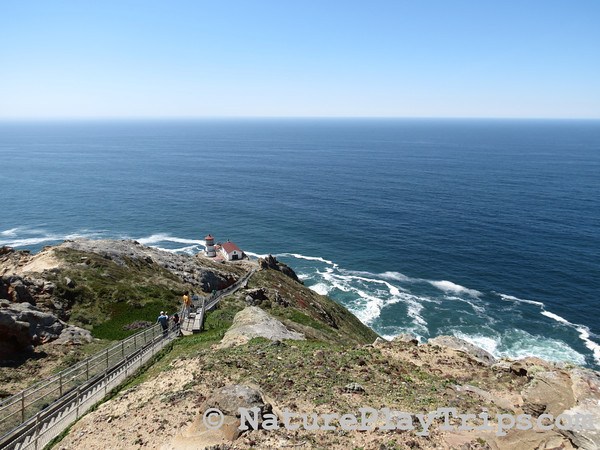 The Gray Whale Splash or Spray

You’re going to see a splash or spray where there is not supposed to be one. There was quite a bit of foam and tidelines off the Point Reyes Lighthouse, but see that little splash outside the foam? What’s that? 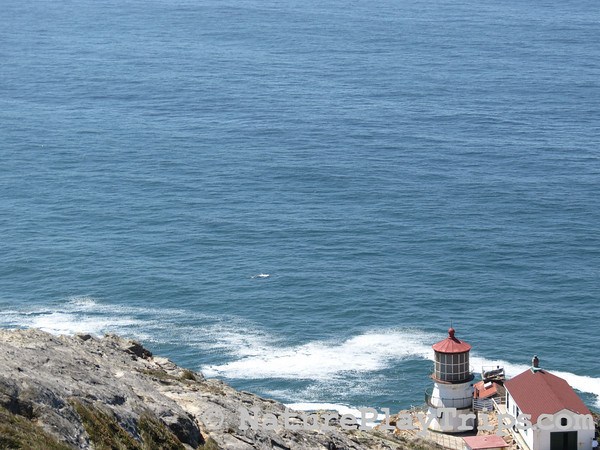 If you can’t see a splash, look for a footprint. Right after the whale dives, there’s a smooth spot left on the surface of the ocean: 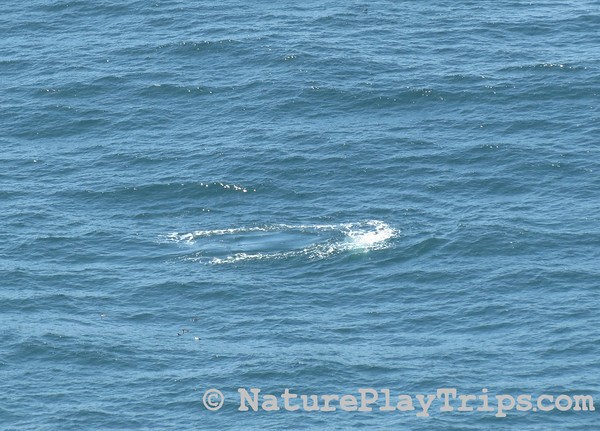 Here’s another footprint from far away which is easy to spot at the edge of the foam: 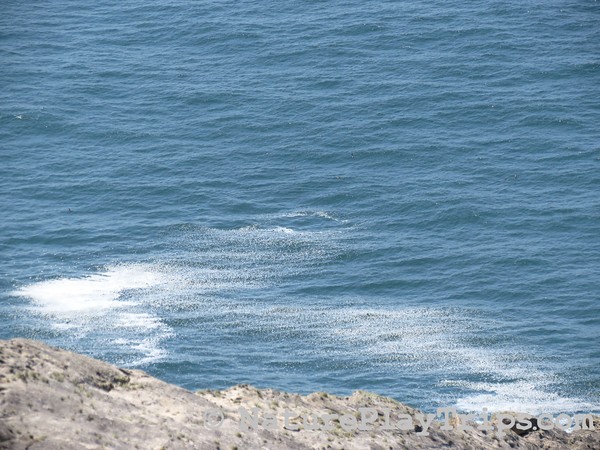 Spotting the dorsal area is the typical view you’ll catch. The whale comes up to breath and then dives — all you see is the mighty whale’s “back” or “hump.” It’s easy to tell the gray whales because they have lighter patches of barnacles. 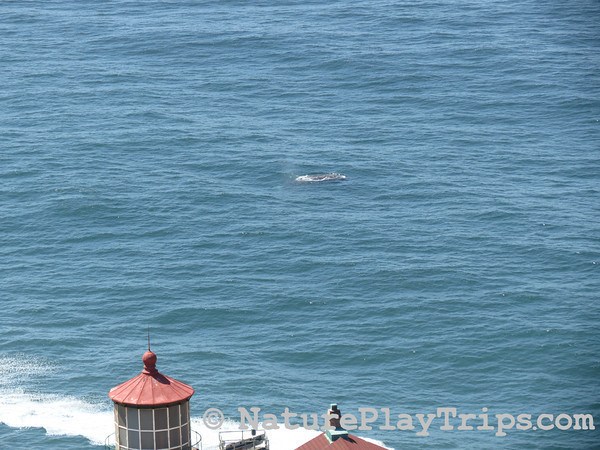 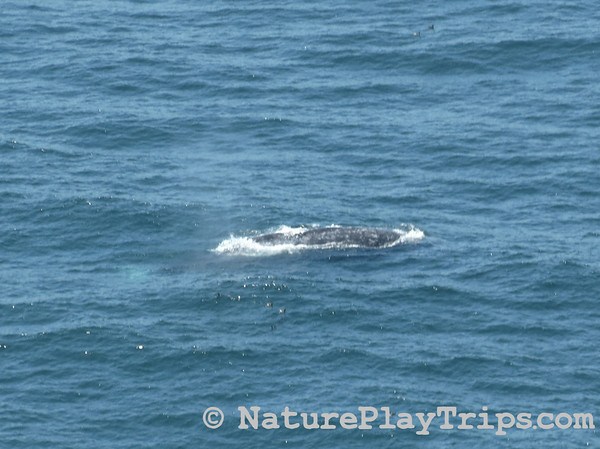 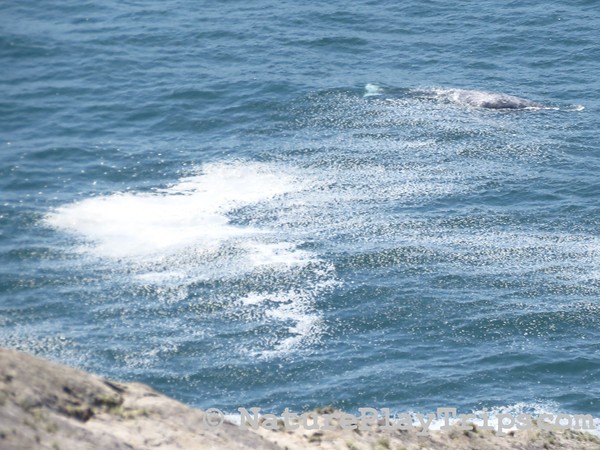 But, wait, what’s that? Is that the whale’s tail I see? It’s called a fluke and it’s visible under the water as a lighter color. Can you make it out? If you’re lucky, the whale will show you its fluke. You’ve probably seen some amazing professional photographs or artist’s renditions of the fluke. But when you’re a person who doesn’t get to camp all day with your fancy camera lenses, the fluke will look like this: 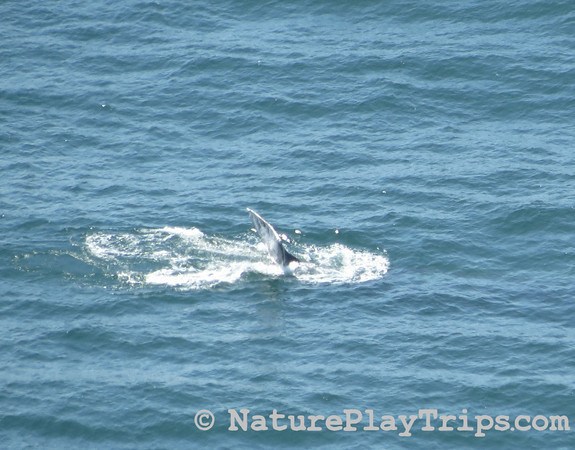 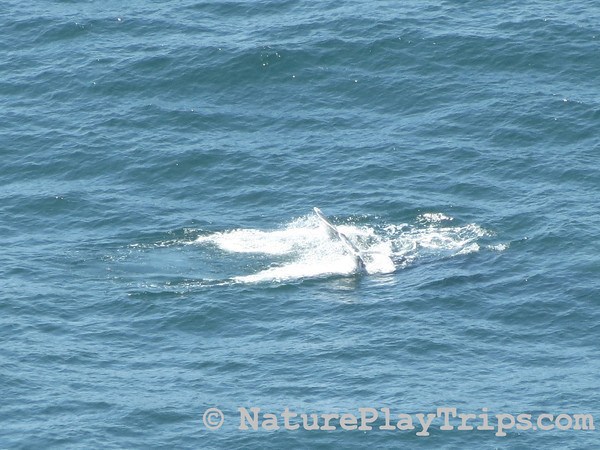 If you’re REALLY lucky you’ll see them spyhopping or breaching. Spyhopping whales just pop up vertically out of the water to take a peek. Their entire head is out of the water and their tail is hanging down below. Kind of how you’d look if you were treading water in a pool. Breaching is when the whale pops up and splashes down. I’ve only seen this a few times in my life. Once while boating near Anacapa Island off Ventura, CA. And then we spotted it off Leo Carrillo State Beach near Malibu, CA. I believe these were blue whales rather than gray. They were much bigger and they were having fun jumping and splashing very close to shore! 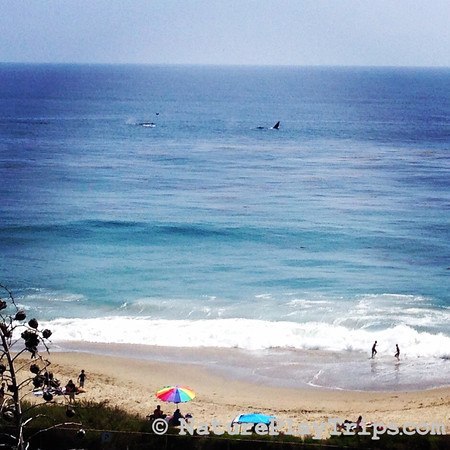 Why, yes, I did listen to “Willy Was a Whale” by Justin Roberts while I composed this post! So there’s your musical inspiration! Have you seen the video? Classic.