This was the Summer of the Humpback on California’s Central Coast for me. I started the summer at the Family Nature Summit staying at the Asilomar in Pacific Grove. I paid a bit extra to go out whale watching on Sanctuary Cruises through the Summit.  Upon exiting Moss Landing and heading into Monterey Bay, we saw one Humpback after another!  5 hours straight of close encounters. I saw spouts, flukes, and one incredible breach – where the whale comes straight out of the water with no warning only to flop back down with a tremendous splash.

At the time, I thought: “Nothing can top this.”

Then we travelled to Cayucos, Cambria, and San Simeon at the end of the summer. 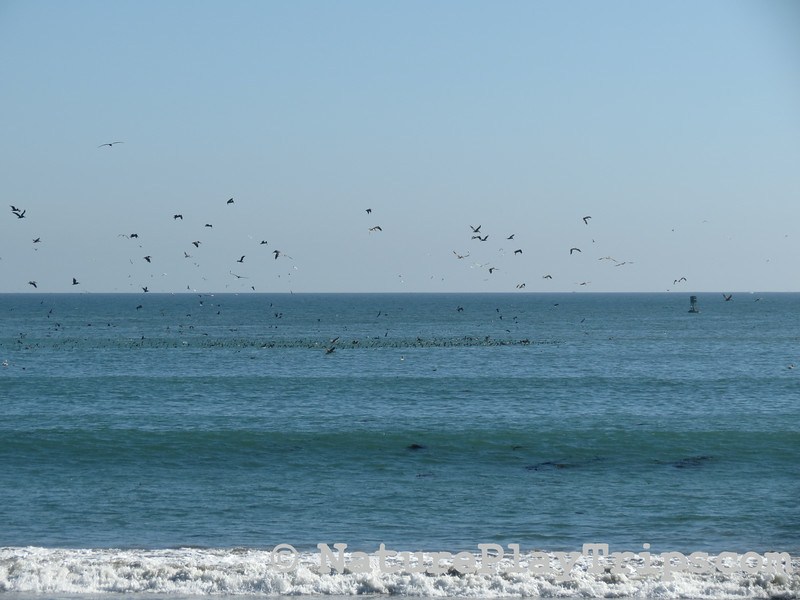 First, look for birds working the water. They like anchovies, too! Notice the waves in the foreground and the buoy in the background? This is very close to shore.

If you are used to seeing the gray whale migration, like I am, then this Humpback phenomenon is a whole new kind of whale watching. Grays are migrating, not feeding. They are heading from Point A to Point B and don’t really mess around. The pattern is:

These Humpbacks were feeding on incredibly abundant schools of anchovy.  If you want to get an idea of what a school of anchovy looks like, check out this video from Scripps Oceanography at from their pier in La Jolla.

This is what is bringing the whales close to shore. In Monterey Bay, there is a deep submarine canyon that’s a good spot for feeding. In Cayucos and San Simeon, we saw the whales straight from the pier and beach! I didn’t even have to go out on a boat. And there wasn’t just one whale, they were grouped together sometimes with up to 10 in one spot.

How many spouts can you see in this photo? 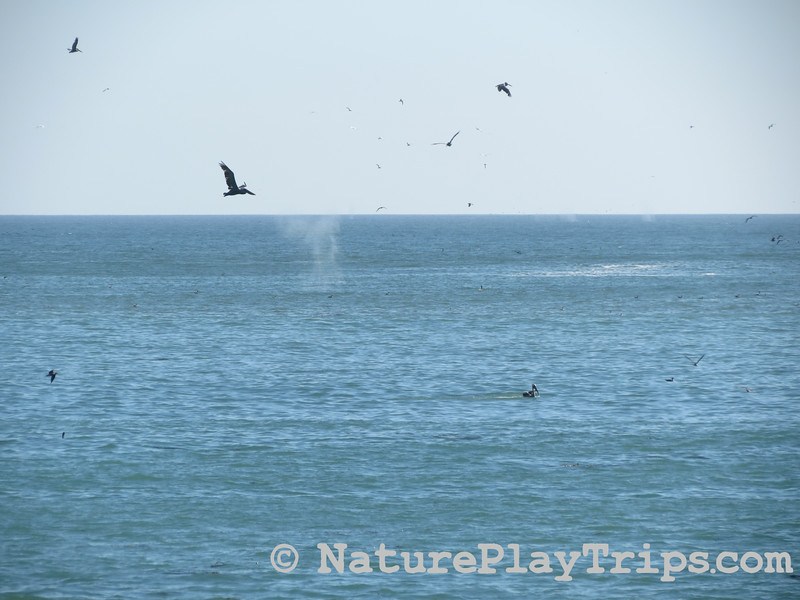 There are 4. One in the foreground, 2 to the back on the right side of the photo, and the final one breaking the horizon out in the distance behind the closest one.

Totally impressive to see from shore. On a normal day, I’d see those spouts and count myself lucky. But this was no normal day! 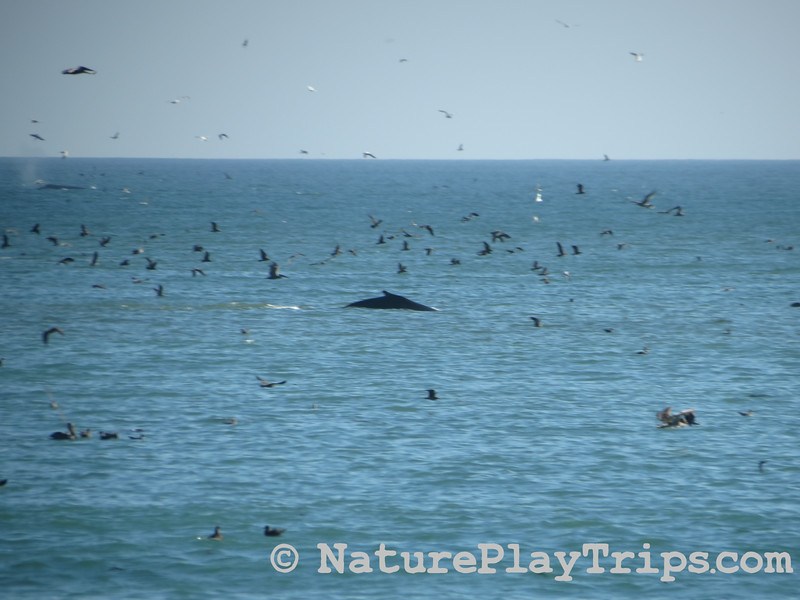 Can you see not only one, but the dorsal of two whales in this photo?

Okay, I’ve lost it at this point! “Did you see? Did you see?” I’m yelling at my kids. “Yes, Mom. We see.” Over and over and over. The whales are spouting, moving, and then . . . lunge feeding!  Now, most of the people around us were oblivious to the action happening right in front of their eyes. I see dolphins almost every time I go to the beach. Just keep your eyes out and scan the ocean. You might just be rewarded. 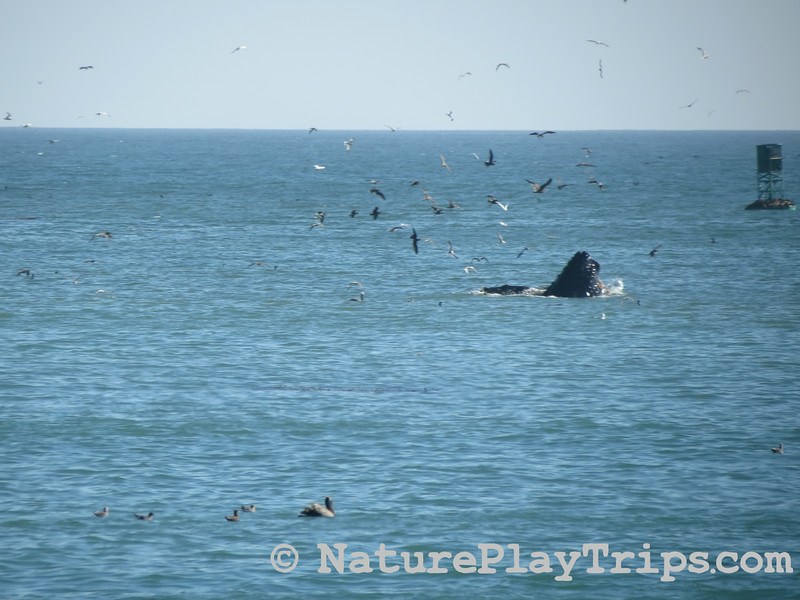 I’m just standing there at the beach and seeing this so close! We eventually have to leave and check in to our hotel. No whales in the ocean there, but I go to sleep completely enchanted by the experience. I don’t know what we had on the itinerary for the next day, but I wake up saying “I want to go back. Let’s see if we can find the whales. Hike Estero Bluffs (in between Cambria and Cayucos). We stop at the first parking area off the road because we see the birds. But this time there’s more! 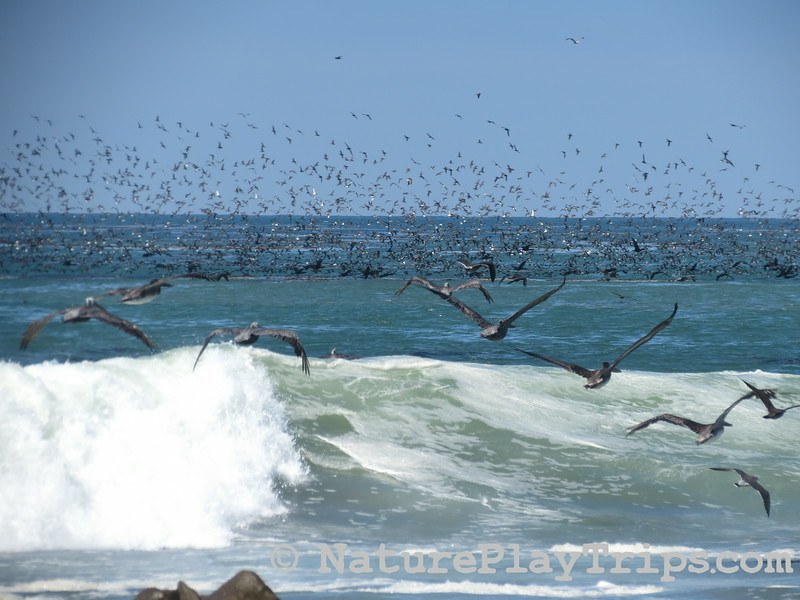 And it’s windy and it’s some of the biggest surf from Hurricane Marie pushing swells up from Mexico. And then we see that dorsal so close to shore and lunge feeding later. 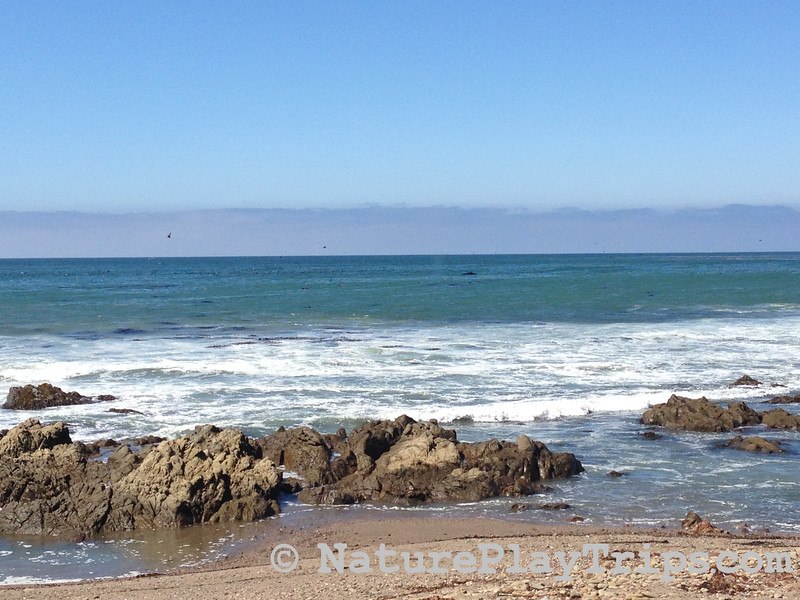 Then the next day it was San Simeon Pier. Spotting a whale as we were driving by. 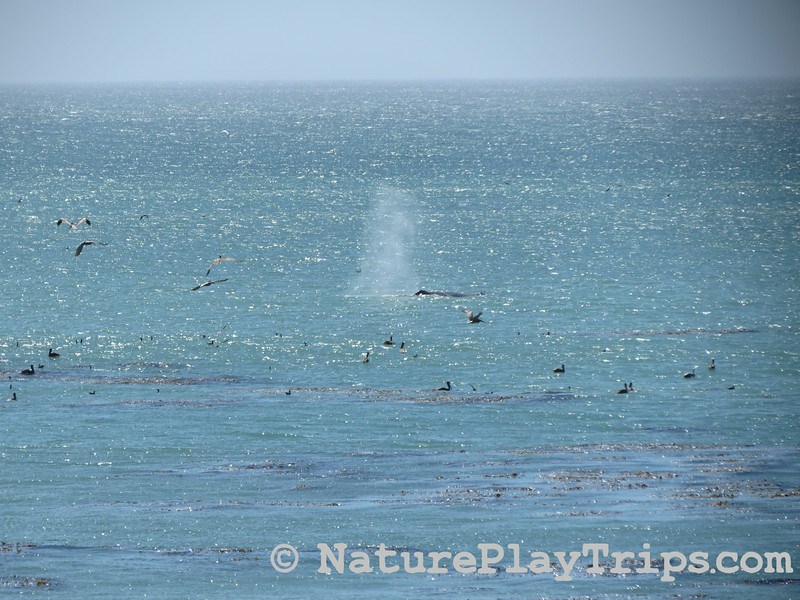 And then the NEXT day even closer to the pier. 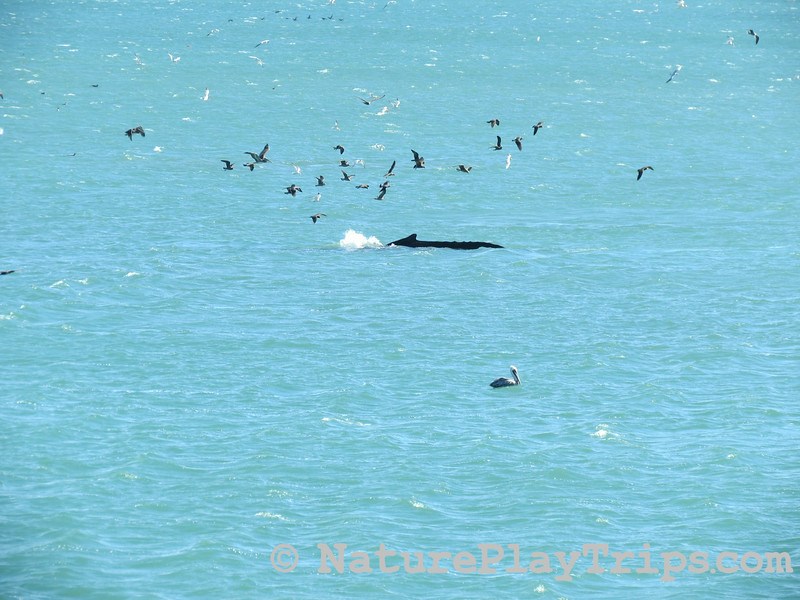 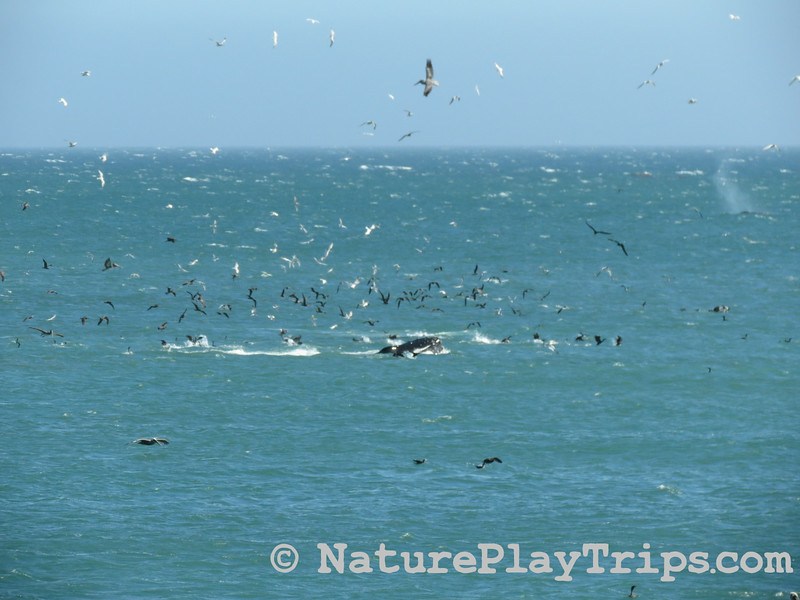 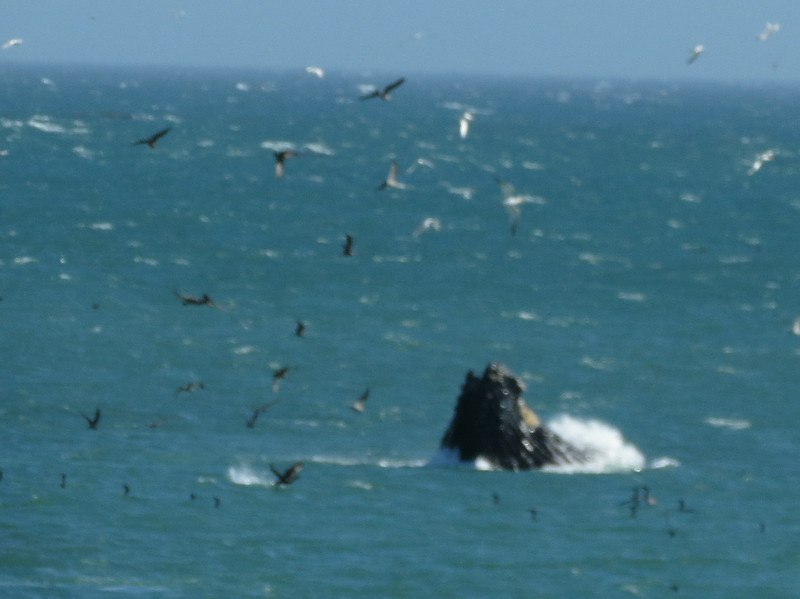 It’s blurry, but you could see it so clearly standing there. How the whales fill their mouths with fish and then blow the water out their baleen.

It was a summer that started and ended with Humpbacks. I’ll never forget those 5 days at the end of August when we saw the whales every day in all of their glory. When I got back, I talked to a writer friend who just happened to be in San Simeon on one of the same days as us. Maybe only a few hours after? She said: “It was everything I love about traveling.” People were offering other people space at the pier rail so they could get a better look. People were lending their binoculars to others. Cameras were out, but not a constant. A few snaps and then back in the purse or pocket. Everyone trying to make this once-in-a-lifetime moment special for everyone else around them.

You can’t plan for this. You can’t buy it.

Nature is a gift.

And the majesty of it is hard to comprehend.

Beautiful! Thanks for sharing. You seem to be all lit up these days...I read extra sparkle and enthusiasm. Neat to see that.

Thanks, Meg. So funny that you picked up on that. The extra sparkle and enthusiasm is coming from a change that's in the works behind-the-scenes. Hopefully launching next week.