No, flat biking doesn’t mean biking with a flat tire! I came up with the term to describe biking on FLAT ground, preferably on an off-street bike trail. You can work up to the dirt trails and hills later. Or not. There are really no rules! (Except: Wear a helmet. That’s a good rule for kids and parents.)

Are you noticing a pattern yet with this Hummingbird Parenting strategy? Sidewalk hiking, flat biking . . . these are the tamer, more-accessible-to-the-whole-family outdoor activities than their distant cousins, like mountain biking or back-country backpacking.

Comparatively, they require less skill, less knowledge, and less investment in outdoor gear. A good pair of shoes for the walking. A helmet and a bike for the riding. That’s all you really need.  Somehow, if we give them names like “Sidewalk Hiking” or “Flat Biking” — it automatically makes them a “thing” and, happily, they are “things” that many of us can do already.

Except my 8 year old son. 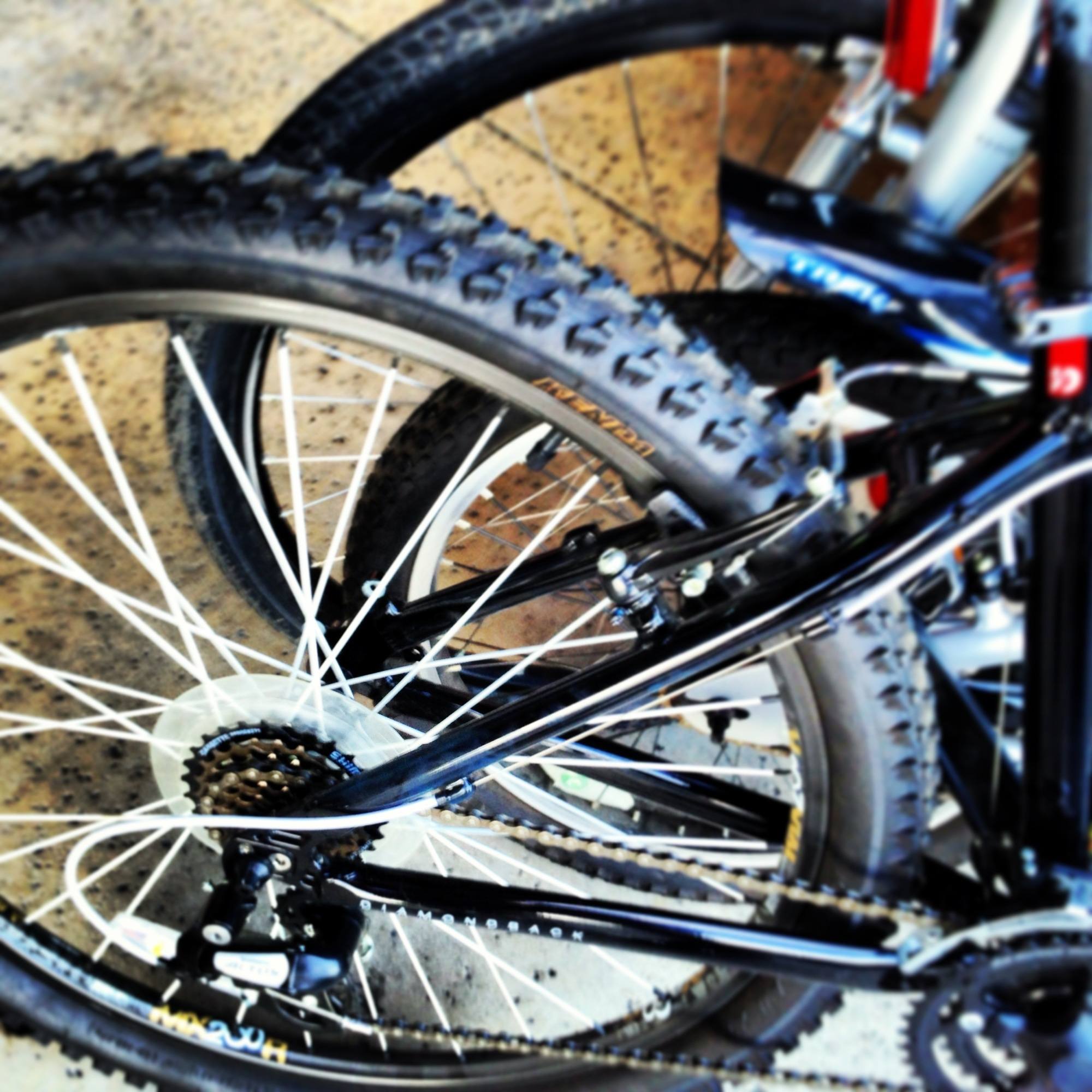 My 8 year old could not ride a bike. I don’t know when I learned, but I’m sure it was younger than 8. In Southern California and on YouTube videos of balance bikes, kids start riding bicycles at, like, 3 or 4 years old. But not my son! No matter the persuasive argument, enthusiastic support, or even time to tackle it on his own — there was absolutely no budging.

He liked to sit on the bike and pretend he knew how to ride, but not actually ride. I really wanted him to ride a bike because some of my best childhood memories come from biking! Little did I know that one of my best memories as a child would turn into one of my worst memories as a parent. More on that story in a minute.

My sister and I would ride down our very STEEP driveway and down our very STEEP hill and race on the FLAT off-street bike path for (what I just looked up all these years later) was a 2.5 mile ride to my cousin’s house. Then she’d jump on her bike and we’d continue another 2.5 miles to the beach. So round-trip, we were going on 10 mile bike rides by ourselves, mostly on the FLAT.

Even better than all that adventuring on our own was the promise of Sunday bike rides with Dad. We knew that time was all about us. (I mean, ask kids we didn’t suspect it was also probably Dad getting a workout and Mom getting a break from kids!) Whatever the aim, I cherish my memories of Dad taking us on bike rides on a regular schedule. I even got to do it again recently as a 40+ year old and him as a 70+ year old and it was equally enjoyable. And, yes, we both wore helmets. 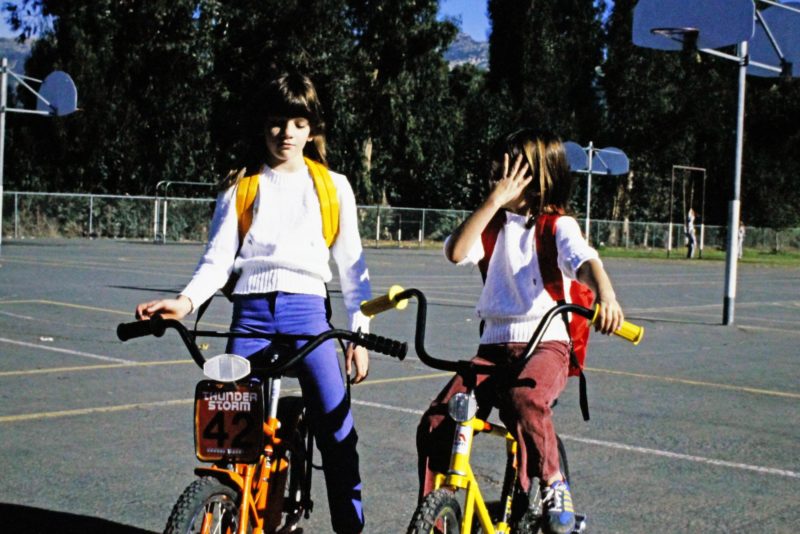 Back to the 8 year old who wouldn’t ride a bike. I don’t even remember where or how victory was achieved. However, the exact day he learned how to ride his bike . . .

The first thing we did was take him to Aliso and Woods Canyon Wilderness Park as a reward. It’s a nice wide paved path that we’d hiked before. He’d always wanted to go to “Robber’s Cave” which, over the years, I’m sure we repeatedly laid out as potential bait for him to finally learn how to ride since it’s too far to walk, but do-able on a bike. We arrived around 4pm and the sun was setting in a couple hours so we were just going to enjoy the evening, let him practice a bit on the wide path, and see if we could get our 4 year old confident with training wheels. Family bike rides here we come!

We passed the ranger offices to make our way onto the wide path. Most people were heading out of the park at that point. I stayed near the offices with the 4 year old. My husband headed out jogging alongside my 8 year old. I remember watching them go along side-by-side out of view around the bend in the trail. The 4 year old and I worked a bit on riding with the training wheels, but she was a reluctant learner at that point. She just wanted the boys to come back so we could go home. We sat on a log. It was taking a long time. I was starting to get concerned because I thought they were just going to go out a little way and come right back. I got really concerned when my husband phoned instead of showing up. I was thinking . . . skinned knee or flat tire. The tone of his voice worried me almost more than what he said.

“What? What do you mean he took off?”

Turns out my son had it so ingrained that he was going to go to Robber’s Cave when he learned to ride — even though we repeatedly told him that today wasn’t the day because it was so late — that he felt compelled to get himself there that night. He got just far enough ahead of my husband on foot that he didn’t hear the calls that he was “Too far!!!” This was supposed to be just for fun.

The 8 year old was alone.

I’d never even been to the cave, so I couldn’t even point my husband in the right direction. The wide path goes deep into the canyon. There are lots of places to get lost. My son didn’t know this place well enough to be on his own. A dirt path connects off the paved road leading the way to the cave. There are forks in the path and apparently even a piece of wood over a trench that you need to ride your bike over. Would my new rider attempt this? My husband just kept search and searching. We couldn’t communicate because his cell phone didn’t work well in the park. I didn’t know what was happening and it was almost sunset.

The ranger truck came by returning from his last pass in the park. I asked if he’d seen my son or husband.

I told him the whole story. He took a description of what my son was wearing, asking, “Did he have water? A jacket?” I had to answer, “No. Nothing. It was just supposed to be for fun and not very far.” Then the ranger headed back into the canyon.

My husband finally reached me again. “What should I do?” he asks from the fork in the road hoping he won’t miss my son.

I’m completely freaked out and my daughter thinks she’s lost her brother forever.

When . . . who comes riding triumphantly towards us? Alone on his bike? With the ranger truck following him?

I swear it took my husband another 20 minutes to get back to us. That’s how far away he was! Our little Indiana Jones actually made it to the cave where he finally figured out Dad wasn’t with him. So he stayed to wait for Dad for a minute and hopped on his bike to come back — yelling nonsense words at the top his lungs to scare off the wild animals. We’ll never know quite how they missed each other, but we suspect our son was coming down one trail while my husband was searching up another.

Ahhh, freedom. His cheeks were rosy. He had a smile on his face. He said he wasn’t really scared. I could see was confident in where he was going and apparently he knew how to get back the way he came. 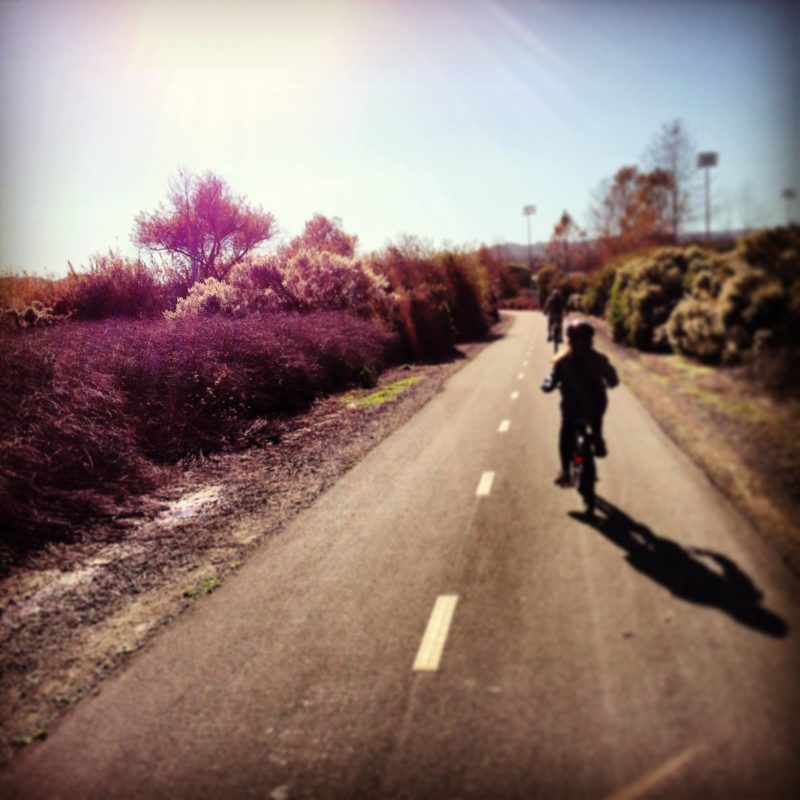 Why write about my worst bike trip memory?

Because, and this is important, I thought I had everything under control. Flat and wide paved path. No traffic. Dad by his side. Helmet on. Expectations explained.

But something “bad” still happened.

Even if you think you’re being safe and have everything under control — something might happen. Hopefully nothing that can’t be fixed, but things beyond your control can just happen. When I look back at this story, I think about how this has become part of the kid he is today. Part of his mythology. He was brave, and free, and adventurous, and all alone. And he was okay.

He learned something about himself and how to be more aware of his surroundings in the future.

Maybe it’s just our family and bikes? On the way to school one day when she was 9, my daughter ended up suffering a pretty serious head-on bike crash with a middle schooler who was charging us on the wrong side of the path. I was riding right behind her when he recklessly swerved into her path too soon for her to avoid him.

Something bad happened. Right in front of me. I was there to clean up the mess, but I couldn’t prevent it.

If you are interested in learning more about risk perception research related to play, Tim Gill of Rethinking Childhood is a great resource for this. 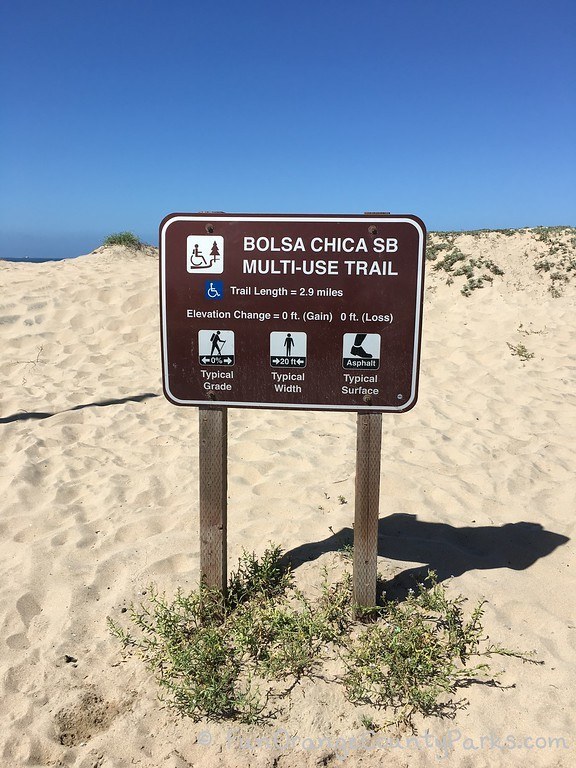 This is post is part of my Hummingbird Parenting blog series. When I introduced Hummingbird Parenting, I talked about a playground parenting style that might remind you of a hummingbird quietly sitting nearby and letting nature play happen. By staying small, and gradually more distant as children grow, parents can avoid interfering in free play, yet remain present to creatively obey societal norms, liability & legal requirements, and to zoom in when safety is an issue. Finally, I set out the premise that this blog series will grapple with today’s parental challenge of simply having fun outdoors without feeling any pressure to achieve or perform according to anyone else’s expectations or agenda.