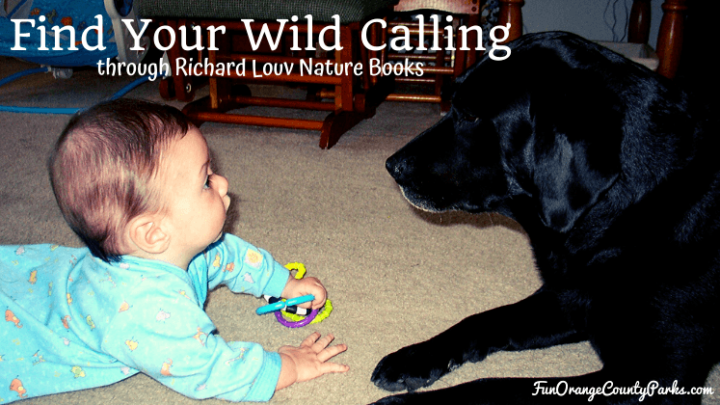 Each of the Richard Louv nature books I read is a gift, but his latest Our Wild Calling: How connecting with animals can transform our lives and save theirs – was an actual gift from a friend of his. I guess that makes me a friend of a friend?

I told my friend that I’d share it with you because that’s what I normally do when I find something I think you’d like. And I knew you would like it before I even read it.

I imagined I could give you a glimpse of the book or a teaser to see if you might want to purchase through our local and amazing Acorn Naturalist (who is offering a 10% off coupon).

But the further I got through the book, the more I realized it’s part of a bigger message from Louv that started with Last Child in the Woods.

Before I go any further, I just want to say that I received no compensation for this review beyond a signed copy of the book for me to read and a few more for a giveaway that I’m running through my weekly newsletter. 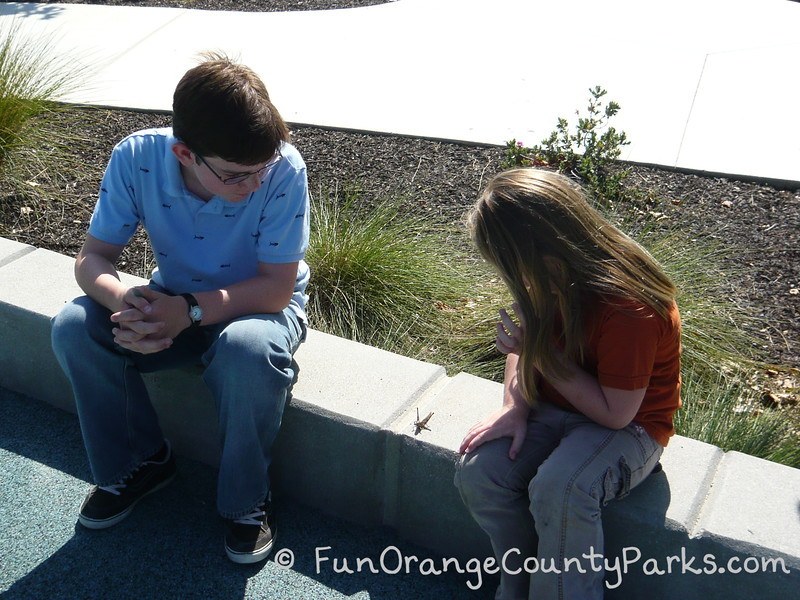 At the end of Our Wild Calling, he says:

Our times call for the adoption of a basic principle that embraces both survival and joy. We might call this the reciprocity principle: For every moment of healing that humans receive from another creature, humans will provide an equal amount of healing for that animal and its kin. For every acre of wild habitat we take, we will preserve or create at least another acre for wildness. For every dollar we spend on classroom technology, we will spend at least another dollar creating chances for children to connect deeply with another animal, plant, or person. For every day of loneliness we endure, we’ll spend a day in communion with the life around us until the loneliness passes away.“

That single paragraph sums up what Louv has been saying ever since I first became aware of his books and got to know him and his work through the Children & Nature Network. 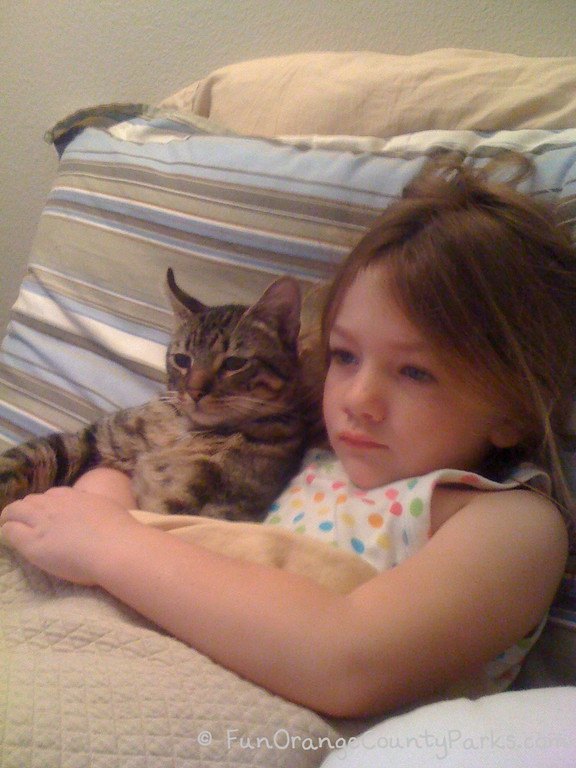 He always takes a nature-rich view of our future. He envisions it and holds it for us so we don’t lose it.

From hearing Louv speak a number of times, I imagine if you talked to him in person, he might ask you about:

Those are the kind of nature connections that make our eyes light up. We don’t have the same facial expression when we talk about a favorite TV show. I love asking people about their favorite play memories which probably gives a similar response.

When I read the title of the book, it made me immediately think of our pets.

The top photo is my nephew as a baby with the family dog and the above photo is my daughter snuggling with one of our family cats some years ago – which still happens on a daily basis even though she – and the cats – are much older.

But as I perused my personal animal connection photos, I found a surprising number of insects taking up most of my photo file space.

Like the time the ladybugs swarmed and we had them all over us! 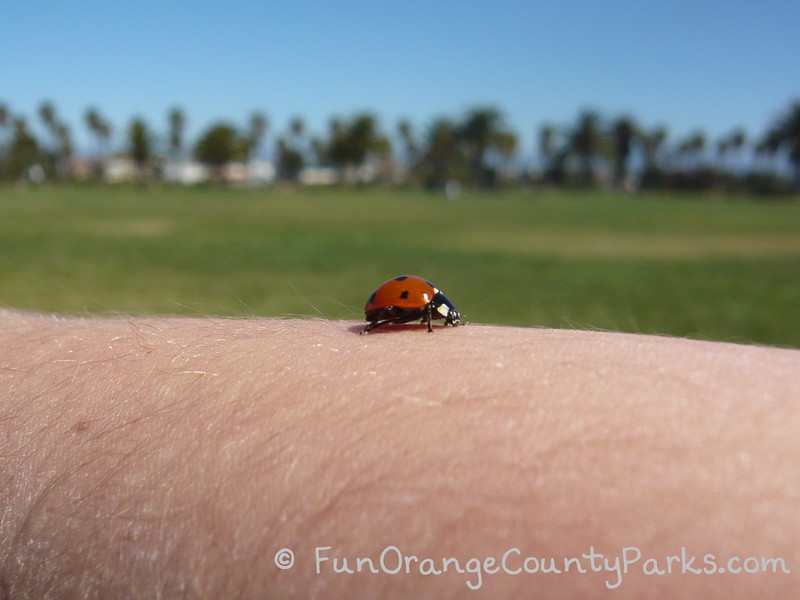 Or all the times the loud beetles would buzz around the compost bin in the school garden causing shrieks of terror as they hummed into people’s hair while the people ran about crazily and swatted away, as I tried to say: “They don’t bite or sting. They are harmless. You are okay.”

Maybe not a positive connection for the screaming people? But I always look on them fondly because of these memories that make me chuckle.

As a California kid growing up in the 70s and 80s, my friends and I all knew about stink bugs. We saw them on the playing fields or the walks to school in the morning. We knew not to step on them. That just wouldn’t be nice.

Speaking of playing fields, I got my first bee sting running around barefoot on the school playing field, blooming with clover. I think I was more upset that I interrupted the bee’s meal and ended its life more than my hot pulsing heel. 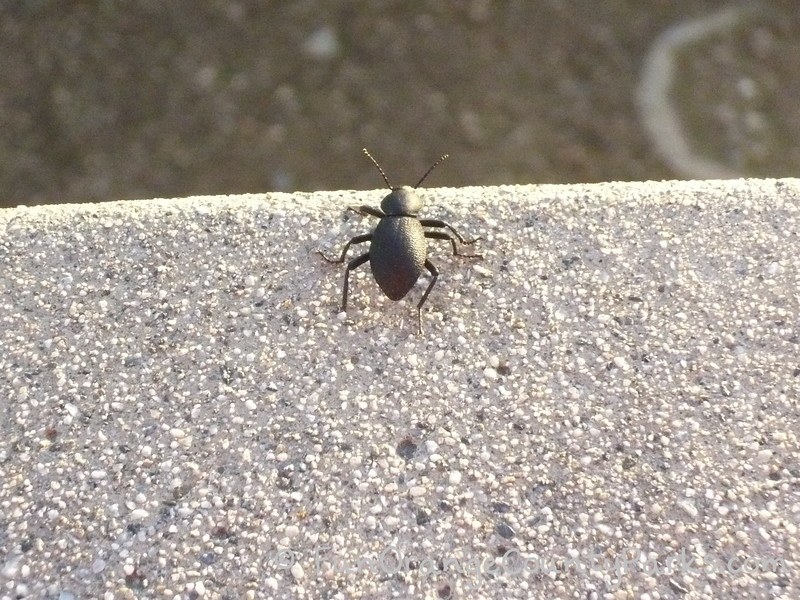 I do have a connection to these small creatures. I just didn’t realize it until Our Wild Calling made me think about my memories and meetings with these friends.

And that’s why I want to share more of Louv’s nature-rich books with you, not just his latest.

Louv’s journalist background comes out in almost every book because he scours sources for stories and comes up with some really interesting perspectives. It’s almost like each chapter could stand alone as its own newspaper column.

You can read this book on a level where you can deeply explore his sources — or you can just take the stories at face value. You’ll read the story of an octopus and they story of a bull elk, and even stories about living organisms as small as protozoa and ants to as big as elephants.

But the parts of the book that are the most powerful to me are the parts where Louv talks about his own relationship with his dog, Banner, or the black fox in Alaska. I’m spellbound by his response to an encounter with two magnificent birds of prey which inspired him to tell his son:

Whoever I say I am, I’m not. Who I was in those moments is who I really am–and I have no words to explain it.“

Except he tries to find his words in this book and I think as a reader you will be satisfied with his dive into the subject.

He wrote Our Wild Calling in a stone cottage in the Cuyamaca Mountains near San Diego in the house where Scott O’Dell wrote Island of the Blue Dolphins.

That book was one of my favorites as a kid. It was about the time that I read that book when my parents realized one of their dreams – to get a boat so they could spend weekends out at the Channel Islands off the coast of Santa Barbara/Ventura. So this was my new backyard and I felt connected. So there’s some significance to this reveal to me.

And that’s the beauty of his writing. I think everyone will think of times where they’ve encountered wildlife and how it felt. 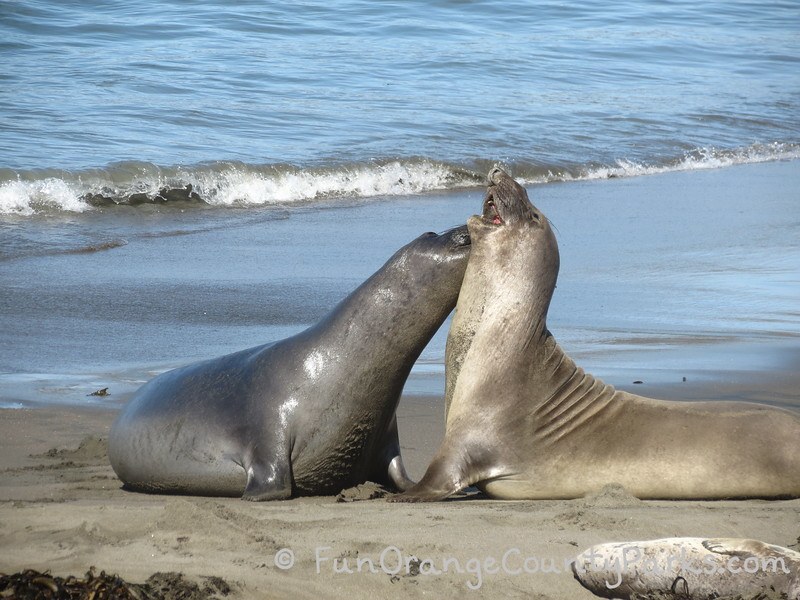 Nature becomes real only when it moves from the head into the heart. A new nature movement will not succeed if fueled only by fear or an intellectual vision of an alternative future, but it will if driven by a deeply emotional, familial, and spiritual connection to other species.“

See! Nature-rich. He doesn’t like to be all gloom & doom or jump on the bandwagon of showing every possible image of destruction to come. As a reader, you will be refreshed by hearing this perspective!

If I had to name my truest and most meaningful nature connection, it would have been a moment spent with my young daughter who was sketching in her nature journal. She was probably about 8 and it was almost sunset in a local spot where we loved to go to view birds. We were quiet and I said something about the bobcats that supposedly lived in this place but that I’d never seen one in the wild.

And my daughter said “Like that one right there?”

The bobcat mom and her 2 cubs walked right past us and then stopped. The camera snap was more reflex than anything and the majority of time was spent making eye contact. I’ll never forget it. 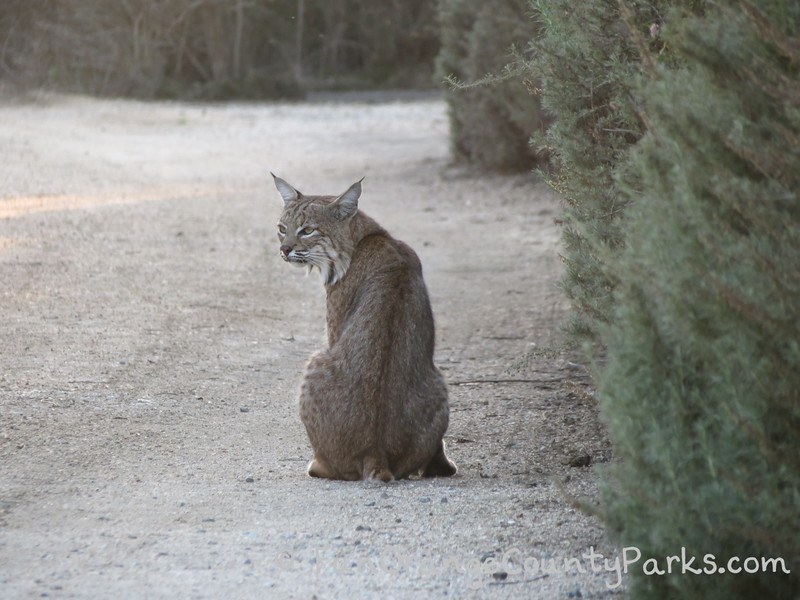 We came just as close to a moose that came roaring out of the bushes when we were in Homer, Alaska, but I don’t know if he even knew we were there (thank, goodness!). I think the moose had its own agenda that didn’t include us. 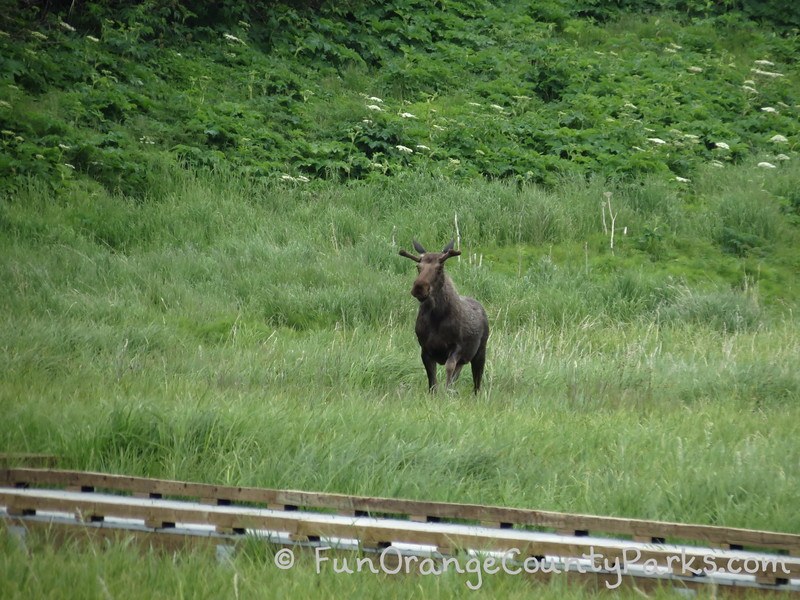 Vitamin N: The Essential Guide to a Nature-Rich Life

This may be my favorite Richard Louv nature book for families because it comes with 500 Ways to Enrich the Health and Happiness of Your Family and Community (and Combat Nature-Deficit Disorder). If you don’t know WHAT TO DO when you go outdoors then this will provide some inspiration.

It’s not just for families and kids. You can pick activities to do with friends, too.

Just keep in mind you don’t have to DO anything. You can just go to a place and BE. We would never have had our ladybug or bobcat or moose encounters if we had an agenda. Stillness outdoors is enough. 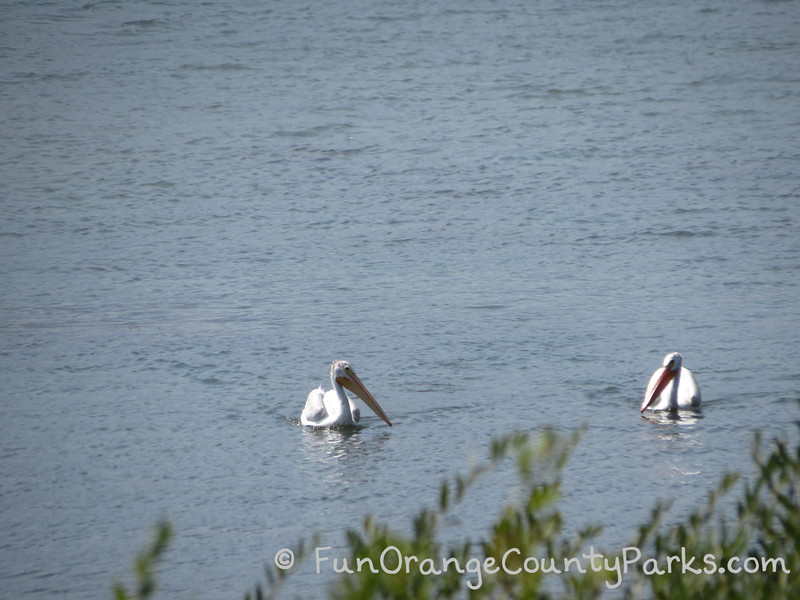 The Nature Principle: Reconnecting with Life in a Virtual Age

Sally Jewell (President and CEO of REI at the time who went on to become Secretary of the Interior under Obama) endorsed this book as “a powerful vision that offers us a blueprint for a better world and happier, healthier inhabitants.”  Again, this is an excellent book to read if you are in despair about the state of the world today.

It’s full of nature-rich hope with concepts like natural creativity and the hybrid mind with a vision not only for us as a society but for each of us to find our own way to health and happiness in “creating an everyday Eden.” 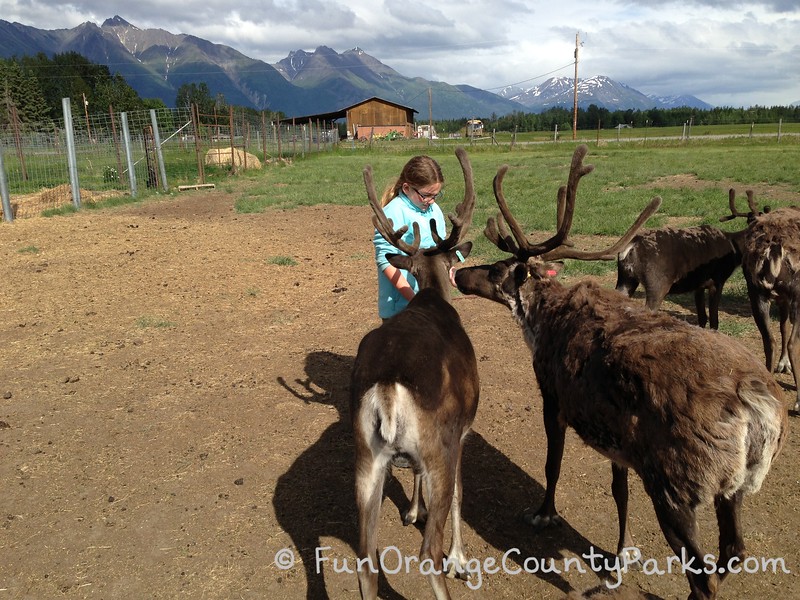 Last Child in the Woods: Saving Our Children from Nature-Deficit Disorder

This is actually his 7th book, but it’s the first of the Richard Louv nature books that most of us have read. A spiky bubble graphic on the front cover proclaims “The Book That Launched an International Movement.”

You can read about how this is where “nature-deficit disorder” was coined and how “his books have been translated and published in 24 countries, and helped launch an international movement to connect children, families and communities to nature.”  My favorite and the most memorable story from this book is this:

. . . the back page of an October issue of San Francisco magazine displays a vivid photograph of a small boy, eyes wide with excitement and joy, leaping and running on a great expanse of California beach, storm clouds and towering waves behind him. A short article explains that the boy was hyperactive, he had been kicked out of his school and his parents had not known what to do with him–but they had observed how nature engaged and soothed him. So for years they took their son to beaches, forests, dunes, and rivers to let nature do its work.

The photograph was taken in 1907. The boy was Ansel Adams.“

Humans are built to be outdoors in a “nature-oriented existence.”

Read this book to take a peek at what was happening in the world in 2005 before the first iPhone came out in 2007.

I started this blog in April 2008, because I wanted to empower families to take their children out to play and get nature time so I mapped over 325 parks and encouraged everyone to go out and play!

There’s still more encouraging to do and Louv’s nature-rich vision is the one I choose to see and push to make real, even after all these years. 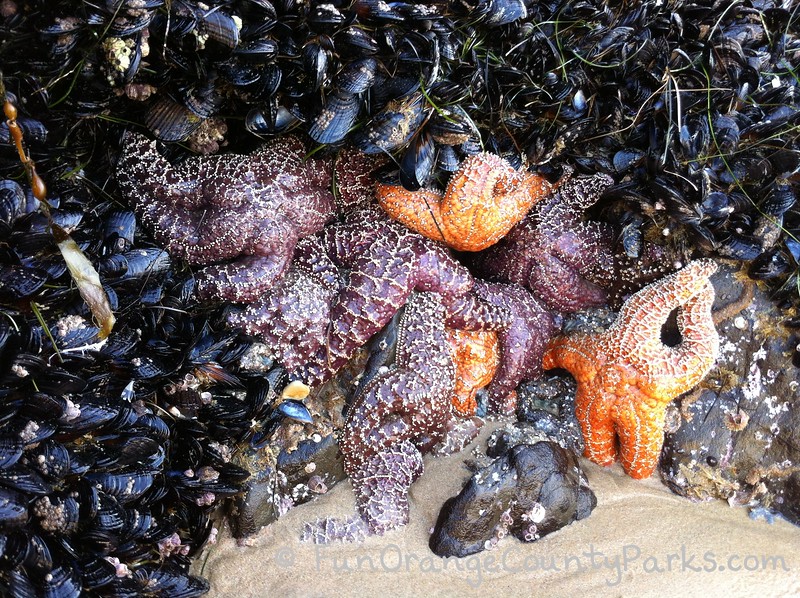 There are more Richard Louv nature books as noted on his Amazon author page that I need to add to my reading list.

Disclosure: As I mentioned at the beginning of this post, I received no compensation for this review beyond a signed copy of the book for me to read and a few more for a giveaway that I’m running through my weekly newsletter. 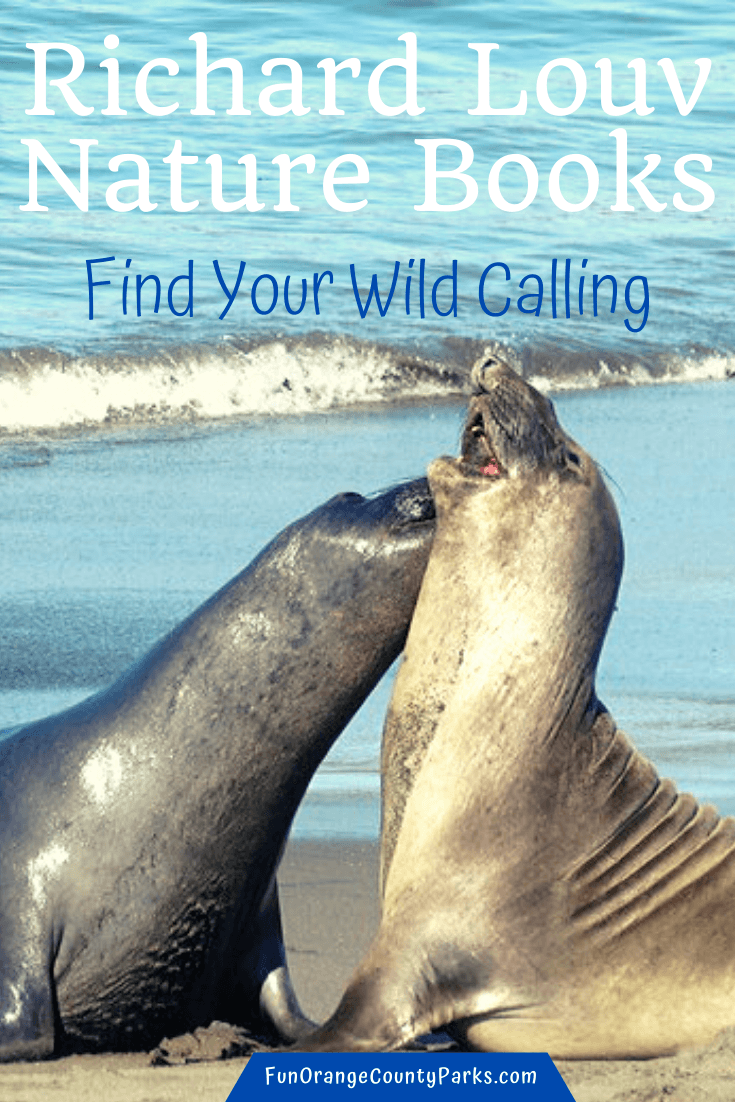 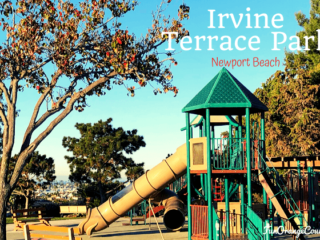 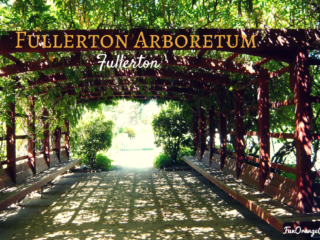 Thanks much, Michele, for your kind words and good works. A terrific summary of the nature books. Hope to see you soon. -- Rich

Writer mom and nature guide promoting play and empowering families to prioritize nature time since 2008. UNOFFICIAL information provided as a FREE community resource to over 300,000 OC families each year. Click to subscribe to my FREE weekly email with park tips and play trips.