Sponsored Post: Thanks to The Coca-Cola Company for sponsoring this post and for putting me on a storyteller’s journey to uncover a whole new perspective on a nearby nature area in Southern California.

In 2015, The Coca-Cola Company accomplished their goal to replenish ALL the water they use in their finished beverage products. That’s the definition of “sustainability” in a nutshell. I never knew this about The Coca-Cola Company. It’s likely because the story of watershed restoration, sustainability, and stewardship is not an easy one to explain. 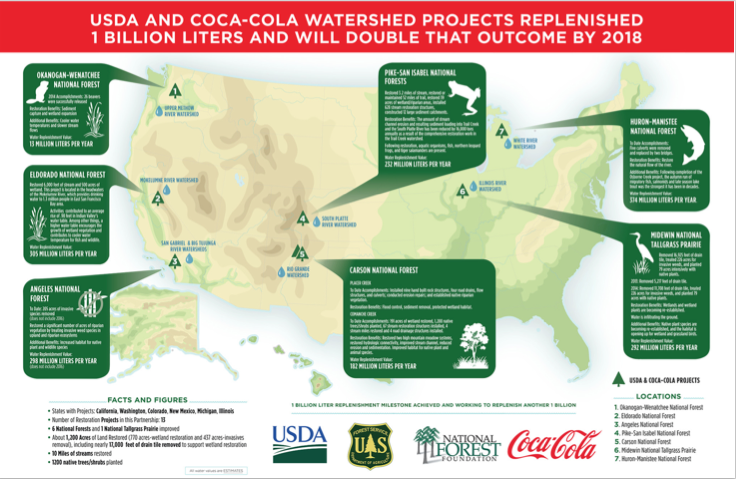 And it’s not just Coca-Cola’s story, there are many groups across many years working tirelessly to preserve vital watersheds across the nation. And it takes a series of boring-to-the-public steps to make a difference.

So I will try to break down the process into movie terms for you (we are talking about LA, right?) – to make it a little more exciting!

In Orange County, we have Cleveland National Forest. In Los Angeles County, there’s Angeles National Forest. Angeles National Forest is near a population center of 17 million and provides ⅓ of the water supply for the county. The canyons of the forest have been a playground for LA’s residents since the early days. This post by KCET about the “Vanished Canyon Resorts of LA” shows some of the history of the area through archival photos. Take a peek before you go and your trip will be more meaningful.

A massive & deadly 252 square mile fire swept through the hills behind La Canada Flintridge, La Crescenta, Altadena, and Sunland along the I-210 corridor and stretching back into the San Gabriel Mountains. If you grew up in California, you know the chaparral ecosystem needs burns as part of its natural cycle, but some of the effects from this fire were devastating to streams.

Arundo is a non-native invasive species. I think it looks a lot like bamboo. It chokes off waterways and crowds out the native species of plants that support local wildlife. Incredibly, it drinks 6x the water of natives. 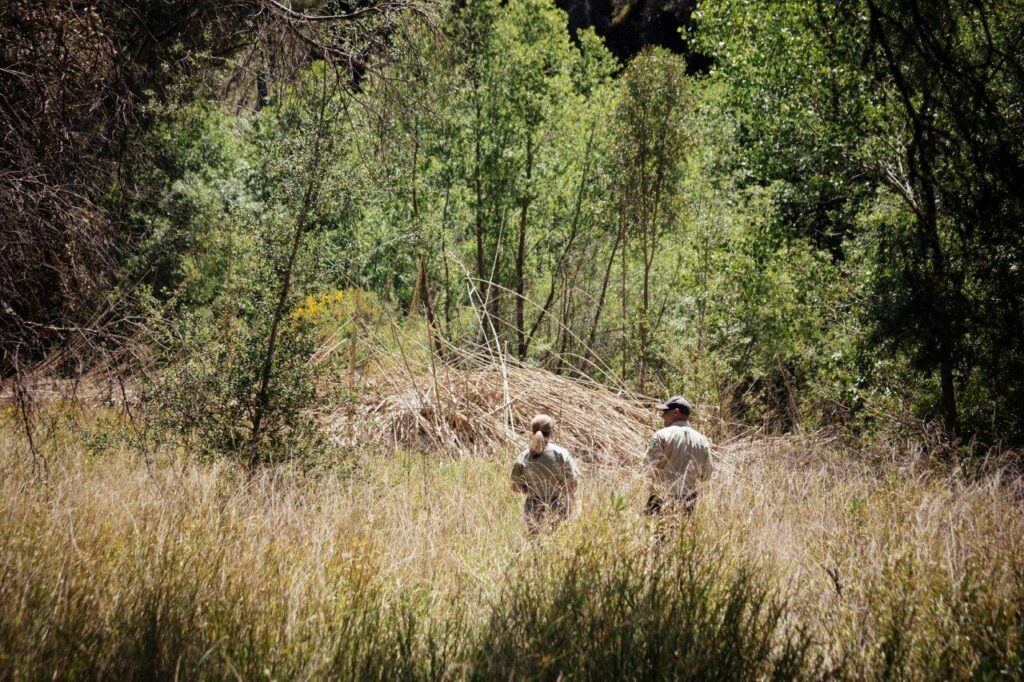 So, basically, this villain can really mess things up for our native plants, birds, animals — and for the way watersheds should naturally drain and replenish our water supply. 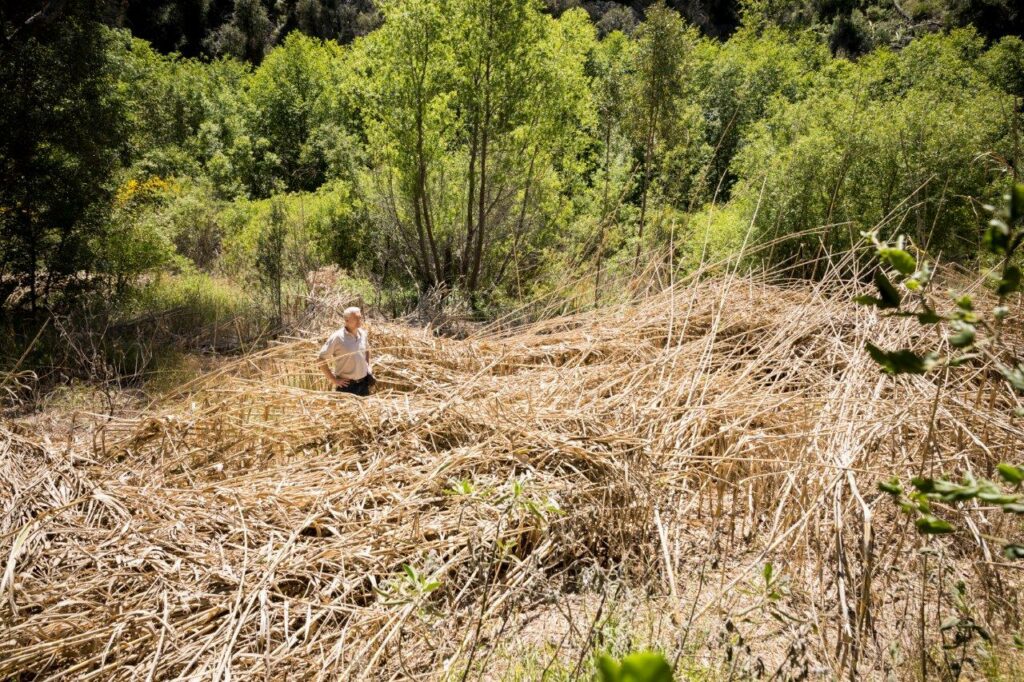 The Heroes: Coca-Cola Helps Fight Invasives Along with Many Partners

The Angeles National Forest (U.S. Forest Service) partnered with The Coca-Cola Company, the National Forest Foundation, and local communities to address ecological issues that impact millions. Part of the restoration work is being implemented alongside the California, Los Angeles, and San Gabriel Valley Conservation Corps.  To date the partnership has been instrumental in removing 231 acres of invasive plant species, cleaned up 2,466 bags of trash and removed almost a mile of graffiti.

“This project is among the more than 100 community watershed projects that Coca-Cola supports around the country to help us continue to replenish 100 percent to the water we use in our beverages and their production and return it to nature,” said Bruce Karas, vice president of Environment & Sustainability, Coca-Cola North America. 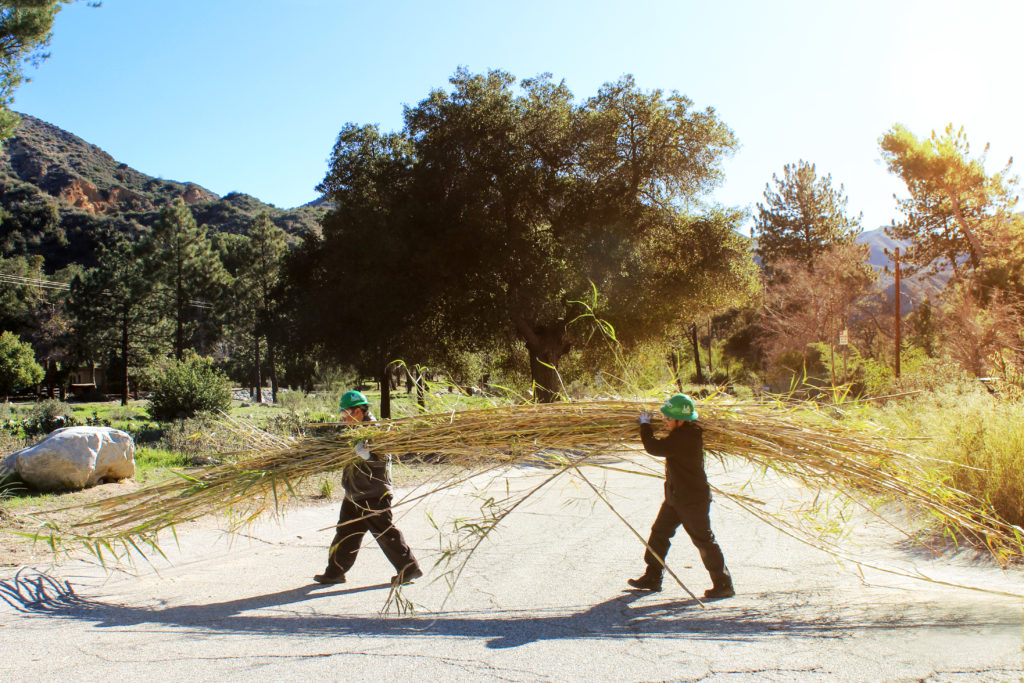 In 2014, part of the National Forest was designated as the San Gabriel Mountains National Monument because of the area’s biodiversity, role in scientific discovery, as well as a place where 800 years of human history is evidenced and continues be used by humans as “a backyard to the nation’s second-largest urban center.”  This area was already the most heavily used area of the Angeles National Forest before the designation, with 4 million visitors per year, and that number increased after the designation.

Designation as a national monument enhanced recreational access and interpretive & environmental education and bolstered already strong partnerships between the U.S. Forest Service and neighboring communities. However, because of the increase in recreational use (more visitors = more disruption to the natural environment), the work of The Coca-Cola Company, the U.S. Forest Service and the National Forest Foundation became arguably even more critical once the area became a national monument. 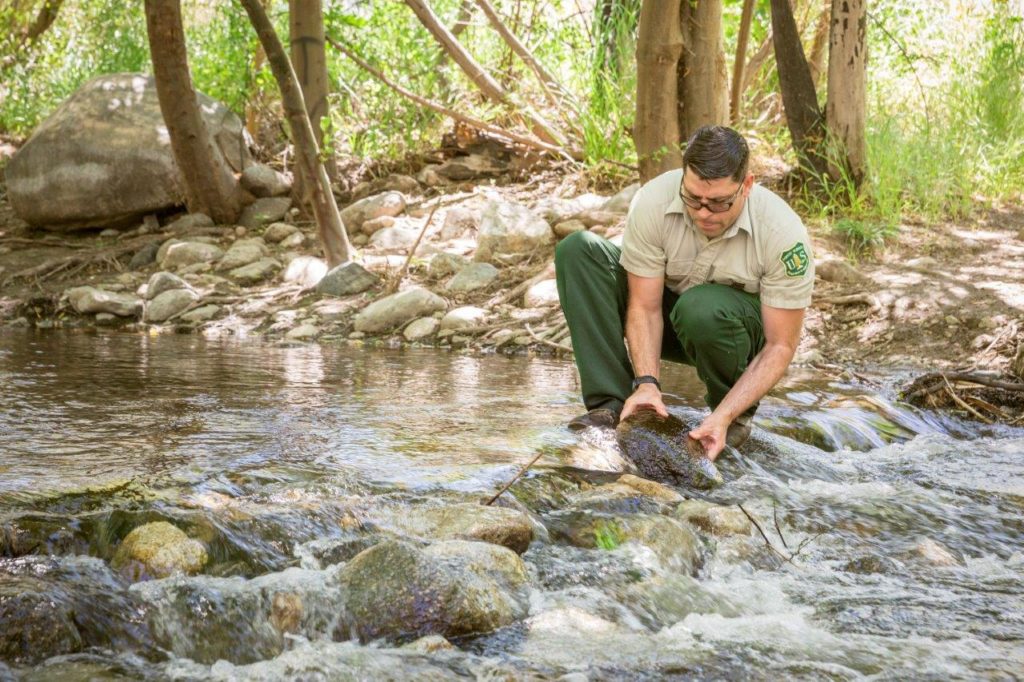 A Happy Ending Is Partially Up to You

Water remains a precious commodity and conservation has to be an ongoing effort. Even though places enjoy protections from the federal government, it doesn’t mean they will always remain protected. It’s up to each of us to remain aware of ways we can help protect natural habitats that enrich our nearby urban lifestyles. Everyone needs to do their part to keep L.A.’s water story flowing — from the federal government, to local government, to environmentally responsible companies, to local volunteers, to the general public. You can volunteer in an official capacity, pick up trash, conserve water at home, or just make sure you respect these public areas and “Pack Out What You Pack In.”

Now you can go see the show for yourself! Bring your family out to explore the forest!

From the Forest Service Field Trip Location Guides: A portion of the Angeles National Forest has been designated a National Monument to preserve not only objects of beauty, but also items of scientific and historical interest. The mission of the USDA Forest Service is “to sustain the health, diversity, and productivity of the Nation’s forests and grasslands to meet the needs of present and future generations.”

3 of these 4 spots are part of the San Gabriel Mountains National Monument and recommended destinations for science field trips as part of the Every Kid in a Park program. This means they should also be suitable for self-exploration by families.

From the Forest Service Field Trip Location Guide for Switzer Falls Picnic Area (PDF): Explore self-guided trails that highlight the history of early settlers, rangers, natural history (flora and fauna), and rocks-geological features of the Switzer area, including the waterfall.

Again, thanks to The Coca-Cola Company for sponsoring this post – the profit from which allows me to keep my time & energy focused on writing stories about parks and nature opportunities for families in Southern California.